All You Need to Know: Figgy Pudding 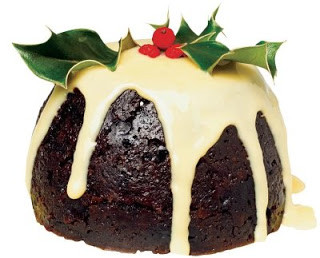 As I've posted before:

The Puritans banned Christmas during the Interregnum (the period between the fall and execution of Charles I until the restoration of Charles II)--and didn't understand why people keep breaking the rules, steaming their puddings and roasting their geese!

This is surely one instance that supports H.L. Mencken's definition: Puritanism: The haunting fear that someone, somewhere, may be happy.

Conflict over Christmas marked the relations between Parliament and the Court of Charles I before the English Civil War and the capture and execution of Charles I. The Puritans knew what the word ChristMAS means--and that the celebration of the Catholic Mass was at the center of the celebration of the birth of Jesus Christ. They also thought all the other festivities and feasting centered around Christmas were "Popish" and "Papastical," very bad things to be! Once they had the power, if Parliament proclaimed the fourth Saturday of December was to be a day of fasting and the fourth Saturday of December happened to be December 25, Christmas Day, the day of fasting trumped the day of feasting and celebration. Even if Christmas Day fell on a Sunday, there was to be no special commemoration. The Book of Common Prayer was banned and the Church of England, like the Catholic Church, gone underground. Celebrating Christmas was an act of rebellion against the rebels who had become the rulers of England!

This year, the English Historical Fiction blog tells you all about figgy pudding, starting off with Charles Dickens' A Christmas Carol and the Cratchit's pudding:

"Hallo!A great deal of steam! The pudding was out of the copper [boiler]. A smell like washing –day! That was the cloth [the pudding bag]. A smell like an eating house and a pastrycook’s next door to each other, with a laundress’s next door to that! That was the pudding! In half a minute Mrs. Cratchit entered—flushed, but smiling proudly—with the pudding. like a speckled cannon ball, so hard and firm, blazing in half of half-a-quartern of ignited brandy, and bedight with Christmas holly stuck into the top." "Oh, a wonderful pudding! Bob Cratchit said, and calmly too, that he regarded it as the greatest success achieved by Mrs. Cratchit since their marriage..."
Posted by Stephanie A. Mann at 12:15 AM