St. John Almond, One of Forty 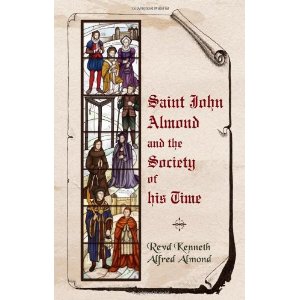 St. John Almond is one of the Forty Martyrs of England and Wales, executed during the reign of King James I:

Saint John Almond was born in Allerton in the year 1576 into a Catholic family in a time when being a Catholic was against the law. John spent much of his childhood in Allerton, near Liverpool, and at Much Woolton in Lancashire for his school years, before moving to Ireland with his parents where he was to finish his education and stay until reaching adulthood.

He then went on to study in Reims, France, where he pursued his vocation into the priesthood.

At the age of 20 he went to the English College in Rome where he would be ordained into the priesthood in1598 and then returned to the dangers of England as a missionary priest in 1602. It was during the end of his time in Rome that he gave a public defence of theses that cover the whole course of philosophy and theology, and known as the "Grand Act" which was warmly congratulated by Cardinal Caesar Baronius and Cardinal Francesco Maria Tarugi.

John’s love for his homeland and his fellow English Catholics made him eager to return and once there he travelled from house to house, village to village and town to town ministering to Catholics and sternly defending the Catholic Faith to those that opposed or questioned him. Saint John Almond never tired of trying to win back [P]rotestants to the [C]atholic creed through his discussion and modesty. . . .

It was during the November of 1612 that seven priests made good their escape from prison. The successful escape was considered to infuriate the Catholic persecutors and it was the Protestant bishop of London, Dr. [John] King, who was most [irritated] at John Almond. Thus it was on the 5th December 1612 that Saint John Almond was taken to Tyburn to be hung, drawn and quartered.

He was known as a 'reprover of sin' and many considered him as a good example to follow because of his ingenious and acute understanding, sharp and apprehensive in his conceits and answers, yet complete with modesty. Saint John Almond was full of courage and was ready to 'suffer for Jesus Christ, who had suffered for him'. He courageously displayed modesty and humbleness and died with the name of Jesus upon his lips.

The illustration above left is for a book written by Reverend Kenneth Alfred Almond and available from Amazon.com. I presume there's some family relationship, although I cannot verify it. Book description:

Perhaps one of the lesser-known Forty Martyrs of England and Wales, Saint John Almond lived in precarious times, when your religion was not just a matter of choice, but a matter of life and death. This was the time of the Spanish Armada, the Gunpowder Plot, the Golden Age of Elizabeth I - a world where Shakespeare's words filled the theatres and many traitors swung at Tyburn. This broad historical study explores the key events of John Almond's life and looks at them in a historical context alongside key events of the sixteenth and early seventeenth centuries. As well as providing a sound basis for any study of these times, this study contains a thorough examination of the events leading up to John Almond's martyrdom - his imprisonment in Newgate, judgment in front of a biased bench and final public execution at Tyburn - and offers a starting point for anyone interested in this era or the saints that lived through it.
Posted by Stephanie A. Mann at 2:04 AM