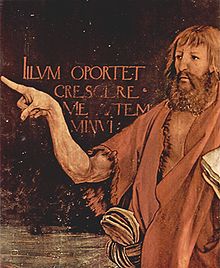 The Advent season in the Catholic Church today is dedicated to preparing for the threefold coming of Jesus Christ: His coming at the end of time in Glory, His coming to each of us (in our earthly life and at the moment of death), and His coming as a little baby. The Second Divine Person of the Holy Trinty becomes Incarnate, taking on our human nature and He lived among us in time, in history. In the last weeks of Advent, that Coming becomes the focus. One of the hymns commonly sung in this season is "On Jordan's Bank the Baptist's Cry", referencing St. John the Baptist as the forerunner of Christ, announcing His coming. The original Latin of the hymn's lyrics, composed by Charles Coffin for the Paris Breviary is:

Charles Coffin was born in Northern France and in 1701 would become a faculty member of the College of Beauvais, and later the principal of the same. In 1718 he became rector of the University of Paris for a short time before returning to the College. An avid scholar and Latin author, poet, and hymn writer, Coffin published a number of his Latin poems in 1727 and in 1736 published his Hymni Sacri Auctor Carolo Coffin, a collection of one hundred of his own hymns, many of which were also published in the Paris Breviary. Following the styles of Ovid and Horace, “he was the outstanding Latin author France has produced.” In 1736, the Archbishop of Paris commissioned Coffin, along with several other French writers, to create the Paris Breviary, with the intention of replacing the “…ancient Latin hymns with more modern ones.” In the preface to his Hymni Sacri, Coffin writes:

In his porro scribendis Hymnis non tam poetic indulgendum spiritui, quam nitore et pietate consulendum esse existimavi. Pleraque igitur, argumentis convenientis e purissimis Scripturs Sacra fontibus deprompsi quae idoneis Ecclesiae cantui numeris alligarem.
[In composing the hymns which follow, I have judged it right not so much to give rein to a poetic spirit, as to have regard to elegance and piety. For the most part, therefore, I have drawn their themes from the purest sources of Sacred Scripture, and have incorporated these in verses fitted for the Church's song.]

The dissemination of a number of Coffin’s hymns occurred in great part thanks to the Rev. James Chandler (1806-76), a Vicar in the Anglican Church of Witley. Chandler’s translations resulted from his desire to “…see the ancient prayers of the Anglican Liturgy accompanied by hymns of a corresponding date of composition.”

1. On Jordan’s bank, the Baptist’s cry
Announces that the Lord is nigh;
Awake, and hearken, for he brings
Glad tidings of the King of kings!

2. Then cleansed be every breast from sin;
Make straight the way for God within;
Prepare we in our hearts a home
Where such a mighty Guest may come.

3. For Thou art our Salvation, Lord,
Our Refuge, and our great Reward.
Without Thy grace we waste away,
Like flowers that wither and decay.

4. To heal the sick stretch out Thine hand,
And bid the fallen sinner stand;
Shine forth, and let Thy light restore
Earth's own true lovliness once more.

5. Stretch forth thine hand, to heal our sore,
And make us rise to fall no more;
Once more upon thy people shine,
And fill the world with love divine.

6. All praise, eternal Son, to Thee
Whose advent sets Thy people free,
Whom, with the Father, we adore,
And Holy Ghost, forevermore.

Read more about the hymns of Charles Coffin and his translator, Rev.James Chandler, here.
Posted by Stephanie A. Mann at 12:10 AM