St. Bernard and the Cistercians in England 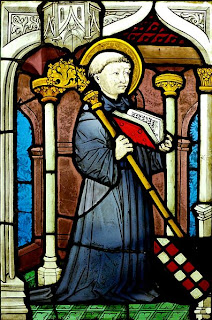 From Tea at Trianon comes this link to an article arguing for the long-term beneficial effects of the monasteries in England even after their dissolution:

Having looked at statistics covering 40 counties in England, the researchers concluded that regions with many Cistercian monasteries experienced a higher population growth in the period 1377-1801.

What’s even more striking is that the influence that monasteries had on population density was the same before and after 1600.

The fact that all monasteries were closed down during the Reformation in the year 1500 [not really: the dissolution occurred in the late 1530's, from about 1535 to 1540] also shows that the monasteries had an influence on society several centuries after being closed down.

So it appears that it wasn’t only the monks’ excellent abilities to e.g. use watermills that have been passed on to posterity. Rather, it was something more inherent and fundamental.

“We are cementing that the monks passed on their cultural values by showing – based on the European Values Study – that European regions with several Cistercian monasteries still to this day value diligence and moderation more than other regions,” says Bentzen.

“Our study of monks shows that societies that had a culture where diligence and moderation were highly valued had an advantage when the Industrial Revolution started. All else being equal, countries with high levels of work ethic will, historically speaking, achieve greater prosperity.”

Email ThisBlogThis!Share to TwitterShare to FacebookShare to Pinterest
Labels: Cistercians, dissolution of the monasteries, Monasteries, St. Bernard of Clairvaux