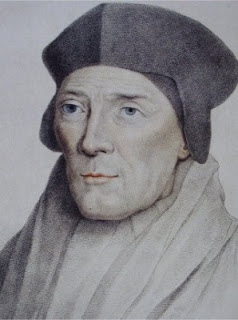 From the Catholic Encyclopedia: "When the question of Henry's divorce from Queen Catherine arose, Fisher became the Queen's chief supporter and most trusted counsellor. In this capacity he appeared on the Queen's behalf in the legates' court, where he startled his hearers by the directness of his language and most of all by declaring that, like St. John the Baptist, he was ready to die on behalf of the indissolubility of marriage. This statement was reported to Henry VIII, who was so enraged by it that he himself composed a long Latin address to the legates in answer to the bishop's speech. Fisher's copy of this still exists, with his manuscript annotations in the margin which show how little he feared the royal anger."

According to Taylor Marshall, that was not St. John Fisher's first comparison of himself to St. John the Baptist, whose martyrdom we celebrate today:

As early as 1530 Saint John Fisher began to preach that he was willing to die like Saint John the Baptist in defense of the sacrament of matrimony. You'll remember that John the Baptist received martyrdom for protesting King Herod Antipas' adulterous marriage to Herodias.

When John Fisher was convicted of "treason" he was, of course, sentenced to death. Henry, as Head of the Church" had already defrocked John Fisher and deposed him of his bishopric. Pope Paul III responded by naming John Fisher as a cardinal of the Catholic church. This infuriated Henry VIII who said that the Bishop of Rome did not need to send the cardinal's hat to Fisher - Henry would instead send the Fisher's decapitated head to Rome!

(Which is a little like St. John the Baptist's head being delivered to Salome, as Caravaggio depicted above.)
Posted by Stephanie A. Mann at 1:11 AM