A Day of Triumph for Mary Tudor 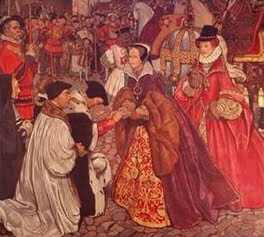 On August 3, 1553 Mary Tudor, now Queen of England and Ireland, entered London in triumph. She had defeated the attempt by her deceased half-brother Edward VI and the president of his council, John Dudley, Duke of Northumberland to place Lady Jane Dudley (nee Gray) on the throne in contravention of Henry VIII's will.
Her half-sister Elizabeth accompanied Mary on this triumphant day--the restoration of Mary's claim to the throne as willed by Henry VIII also meant that Elizabeth's claim was more secure. Mary's anointing and coronation as Queen in October meant that Elizabeth could be anointed and crowned, because Mary set the precedent for a Queen Regnant to receive the same regalia and ritual a King Regnant received.

The "Nine Days Queen" was held in the Tower of London as was her spouse, Guildford Dudley. Mary demonstrated remarkable clemency in not having Jane executed immediately for treason--although Jane's father-in-law, John Dudley would soon be on the block!
Posted by Stephanie A. Mann at 6:03 AM