The Queen's Six at Ascot Priory 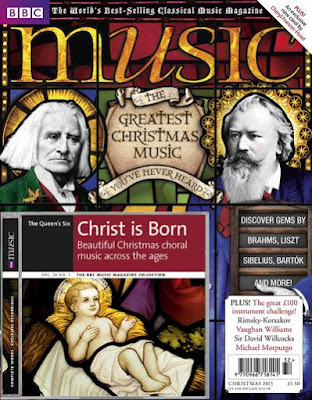 I'm looking forward to receiving the Christmas issue of the BBC Music Magazine because it features the annual Christmas music CD. This year's is by The Queen's Six:

THE QUEEN'S SIX were established in 2008, the 450th anniversary of the accession of Queen Elizabeth I, from whom they take their name.Elizabeth I was a great patroness of the arts, and often engaged the services of musicians to write and perform for her at court. The notable ‘six’ from this era were Thomas Tallis, William Byrd, Thomas Tomkins, Thomas Morley, Orlando Gibbons, and Thomas Weelkes.

Based at Windsor Castle, all the members of the 21st century 'Queen's Six' are also Lay Clerks of St George's Chapel, whose homes lie within the Castle walls. The Chapel Choir, which consists of boy trebles and twelve professional adult male singers, performs some eight services a week, as well as at private and state occasions, often before the Royal Family.

Some of the musical selections were recorded in St. George's Chapel at Windsor, others at Ascot Priory.

Ascot Priory was the mother house of a Tractarian, Anglo-Catholic Church of England religious order for women with connections to Florence Nightingale and nursing, according to the priory's website:

For a century and a half, Ascot Priory was the mother house of the Society of the Most Holy Trinity, the first of the Religious Orders re-founded in the Church of England after the Reformation. It began as The Sisterhood of the Holy Cross in Park Village, North London, in 1845 – within just twelve years of the beginning of the Oxford Movement and the start of the revival of catholic life in the Church of England.

In 1856 the Sisterhood of the Holy Cross amalgamated with Priscilla Lydia Sellon’s Devonport Society (founded in 1848), under the title of The Congregation of Religious of the Society of the Most Holy Trinity.

The property at Ascot was purchased with the aid of gifts from Mother Lydia’s father and the Revd Dr E. B. Pusey, and the present buildings – in 40 acres of beautiful woodland and gardens – were begun in 1860, with the aim of supporting the London hospitals by providing convalescent care in healthy surroundings.

More about the organizing of religious orders for women in the Church of England here. The order ceased to exist when the last nun died in 2004; then the priory became a retreat center.

Of course I noticed the name of Blessed John Henry Newman's great friend, the Reverend Doctor E.B. Pusey. The website of Pusey House, St. Giles at the University of Oxford offers this summary of Pusey and his connection to Ascot Priory, where he died:

PUSEY is chiefly remembered as the eponymous representative of the earlier phase of a movement which carried with it no small part of the religious life of England in the latter half of the 19th century. His own chief characteristic was an almost unbounded capacity for taking pains. His chief influence was that of a preacher and a spiritual adviser. As a preacher he lacked all the graces of oratory, but compelled attention by his searching and practical earnestness. His correspondence as a spiritual adviser was enormous; his deserved reputation for piety and for solidity of character made him the chosen confessor to whom large numbers of men and women unburdened their doubts and their sins.

In private life Pusey's habits were simple almost to austerity. Though fierce with his opponents, he was gentle to those who knew him, and his munificent charities gave him a warm place in the hearts of many to whom he was personally unknown. He financed the building of St Saviour's Church, Leeds, and was instrumental in the foundation of Ascot Priory. In his domestic life he had some severe trials; his wife died, after eleven years of married life, in 1839; only one of his daughters survived into adulthood, and his only son, who was a scholar like-minded with himself, who had shared many of his literary labours, and who had edited an excellent edition of St Cyril's commentary on the minor prophets, died in 1880, after many years of suffering. From that time Pusey was seen by only a few people. His strength gradually declined, and he left Oxford to be cared for by the community of nuns he had founded at Ascot, where he died on the 16th September 1882. He was buried at Christ Church in the cathedral of which he had been for fifty-four years a canon, his body being placed in the vault which already held the bodies of his wife and daughters. In his memory his friends purchased his library, and bought for it a house in Oxford, which they endowed with sufficient funds to maintain three librarians, who were charged with the duty of perpetuating the memory of the principles which he taught, the maintenance of the Catholic Faith, and the preaching of the Gospel. Their work continues today.
Posted by Stephanie A. Mann at 12:30 AM