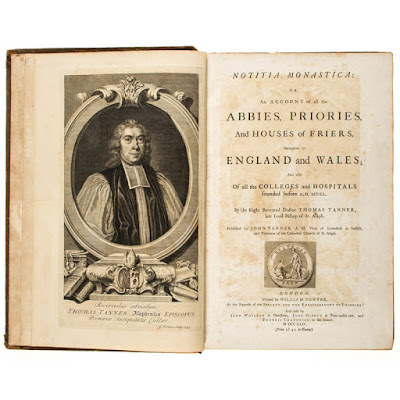 In every great abbey there was a large room called the Scriptorium, where several writers made it their whole business to transcribe books for the use of the library. They sometimes indeed wrote the ledger books of the house, and the missals, and other books used in divine service; but they generally were upon other works, viz. the the Fathers, Classics, Histories, etc. John Whethamsted, abbot of St. Alban's, caused above eighty books  to be thus transcribed during his abbacy. Fifty eight were transcribed by the care of one abbot at Glastonbury and so zealous were the monks in general for this work, that they often got lands given, and churches appropriated for the carrying of it on. In all the greater abbeys, there were also persons appointed to take notice of the principal occurrences of the kingdom, and at the end of every year to digest them into annals.

In these records they particularly preserved the memories of their founders and benefactors', the years and days of their births and deaths, their marriages, children, and successors; so that recourse was sometimes had to them for proving persons' age and genealogies . . .The constitutions of the clergy in their national and provincial synods, and (after the Conquest) even acts of parliament, were sent to the abbeys to be recorded ; which leads me to mention the use and advantage of these Religious houses. For, first, The choicest records and treasures in the kingdom were preserved in them. An exemplification of the charter of liberties granted by king Henry I was sent to some abbey in every county to be preserved. Charters and inquisitions relating to the county of Cornwall were deposited in the priory of Bodmin; a great many rolls were lodged in the abbey of Leicester and priory of Kenilworth, till taken from thence by king Henry III. King Edward I sent  to the Religious houses to search for his title to the kingdom of Scotland in their ledgers and chronicles, as the most authentic records for proof of his right to that crown. When his sovereignty was acknowledged in Scotland, he sent letters to have it inserted in the chronicles of the abbey of Winchcombe, and the priory of Norwich, and probably of many other such like places. And when he decided the controversy relating to the crown of Scotland between Robert Bruce and John Baliol, he wrote to the dean and chapter of St Paul's London, requiring them to enter into their chronicles the exemplification therewith sent of that decision.

The learned Mr. Selden hath his greatest evidences for the dominion of the narrow seas belonging to the king of Great Britain, from monastic records. The evidences and money of private families were oftentimes sent to these houses to be preserved. The seals of noblemen were deposited there upon their deaths. And even the king's money was sometimes lodged in them. Secondly, They were schools of learning and education; for every convent had one person or more appointed for this purpose ; and all the neighbours, that desired it, might have their children taught grammar and church music without any expense to them. In the nunneries also young women were taught to work, and to read English, and sometimes Latin also. So that not only the lower rank of people, who could not pay for their learning, but most of the noblemen's and gentlemen's daughters were educated in those places. Thirdly, All the monasteries were in effect great hospitals, and were most of them obliged to relieve many poor people every day. They were likewise houses of entertainment for almost all travellers. Even the nobility and gentry, when they were upon the road, lodged at one Religious house and dined at another, and seldom or never went to inns. In short their hospitality was such, that in the priory of Norwich one thousand five hundred quarters of malt, and above eight hundred quarters of wheat, and all other things in proportion, were generally spent every year. Fourthly, The nobility and gentry provided not only for their old servants in these houses by corrodies, but for their younger children and impoverished friends, by making them first monks and nuns, and in time priors and prioresses, abbots and abbesses. Fifthly, They were of considerable advantage to the crown, 1) By the profits received from the death of one abbot or prior to the election, or rather confirmation, of another. 2) By great fines paid for the confirmation of their liberties. 3). By many corrodies granted to old servants of the crown, and pensions to the king's clerks and chaplains till they got preferment. Sixthly, They were likewise of considerable advantage to the places where they had their sites and estates: 1) By causing great resort to them, and getting grants of fairs and markets for them; 2) By freeing them from the forest laws; 3) By letting their lands at easy rates. Lastly, they were great ornaments to the country; many of them were really noble buildings; and though not actually so grand and neat, yet perhaps as much admired in their times, as Chelsea and Greenwich hospitals are now. Many of the abbey churches were equal, if not superior, to our present cathedrals; and they must have been as much an ornament to the country, and employed as many workmen in building and keeping them in repair, as noblemen's and gentlemen's seats now.

Bishop Tanner also recounted the disadvantages and problems with the monasteries throughout the centuries, but it must be said that his listing of them is short in comparison with the work and charity--not to mention the prayer and worship--of the monasteries detailed above. He also discusses their relative decline in the sixteenth century, a decline they had no opportunity to recover from as they had in earlier ages (N.B., the tenth century!). The "corrodies" referred to above are the lifetime provisions of food, lodging, and clothing by the monasteries, providing a kind of retirement plan for royal and noble servants--thus saving the monarch from having to grant pensions to his former servants. More on Bishop Tanner here.
Posted by Stephanie A. Mann at 12:30 AM