One of the Diamonds of England and His Companions 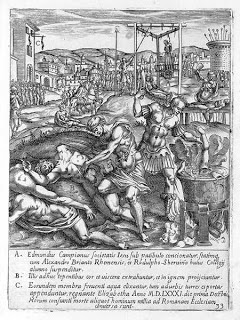 Today is the anniversary of the 1581 executions of St. Edmund Campion, SJ; St. Alexander Briant, SJ, and St. Ralph Sherwin; it is also the Feast of all the English Jesuit Martyrs. Matt Swaim and I will discuss these great martyrs this morning on the Son Rise Morning Show at the end of the 7:00 a.m. hour (Eastern time)--about 7:45 a.m.: 6:45 a.m. Central.

St. Edmund Campion was born on January 25, 1540 in London, the son of a bookseller. He was raised a Catholic, given a scholarship to St. John's College, Oxford, when fifteen, and became a fellow when only seventeen. His brilliance attracted the attention of such leading personages as the Earl of Leicester, Robert Cecil, and even Queen Elizabeth. He took the Oath of Supremacy acknowledging Elizabeth head of the church in England and became an Anglican deacon in 1564. Doubts about Protestanism increasingly beset him, and in 1569 he went to Ireland where further study convinced him he had been in error, and he returned to Catholicism. Forced to flee the persecution unleashed on Catholics by the excommunication of Elizabeth by Pope Pius V, he went to Douai, France, where he studied theology, joined the Jesuits, and then went to Brno, Bohemia, the following year for his novitiate. He taught at the college of Prague and in 1578 was ordained there. He and Father Robert Persons were the first Jesuits chosen for the English mission and were sent to England in 1580. His activities among the Catholics, the distribution of his Decem rationes at the University Church in Oxford, and the premature publication of his famous Brag (which he had written to present his case if he was captured) made him the object of one of the most intensive manhunts in English history. He was betrayed at Lyford, near Oxford, imprisoned in the Tower of London, and when he refused to apostatize when offered rich inducements to do so, was tortured and then hanged, drawn, and quartered at Tyburn on December 1 on the technical charge of treason, but in reality because of his priesthood.

St. Alexander Briant (1556-1581) was a diocesan priest who entered the Jesuits just before he was executed. He studied at Oxford at Hertford (then Hart Hall) College where he met and became a follower of Robert Parsons at Balliol who later became a Jesuit and slipped into England with Campion. Briant crossed the Channel in August 1577 to attend the English College at Douai where he was reconciled to the Catholic Church. He was ordained in 1578 and in August 1579 returned to his homeland and took up ministry in his native shire (Somerset). He was only able to care for Catholics for two years before priest-hunters caught him by accident.

They searched unsuccessfully for Fr. Persons in one house, and then went to a neighboring house where they discovered Fr. Briant. His captors kept him without food and with little to drink for six days hoping to force information from him about Persons. He refused to speak so he was transferred to the Tower for further interrogation and torture on the rack. He wrote to the English Jesuits about his torture, saying that he kept his mind so firmly set on Christ's Passion that he felt no pain during the torture, only afterwards. He also wrote that just before he was tortured a second time, he had determined to enter the Jesuits if he were released from prison. However, since he doubted that he would be released, he asked to be accepted into the Society. The Jesuits accepted him upon receiving his letter.

St. Alexander Briant had carved a small wooden cross and held it in his hands in the courtroom. When one of the judges took it from him (Why?) he said, "You can take it out of my hands, but not out of my heart." Taking the cross from him seems an act of petty cruelty. I guess when you've tortured a man so much that the man using the rack boasts that the victim will be a foot longer, you'll do just about anything.

St. Ralph Sherwin: Born 1550: Rodsley, Derbyshire. Ralph Sherwin was the nephew of John Woodward, rector of Ingatestone in Essex from 1556 to 1566. In 1568, Sir William Petre of Ingatestone Hall, nominated Ralph to one of eight fellowships he had founded at Exeter College, Oxford; Ralph took his MA there in 1574.

Brought up as a Protestant, Ralph converted to the Catholic faith in 1575, and went to the English college at Douai where he was ordained in 1577. He continued his studies at the English College in Rome, his name being the first in the College register. When an oath requiring students to consent to the English mission was required, Ralph readily agreed, saying, ‘Today rather than tomorrow’.

Ralph returned to England on 1st August 1580, but on 9th November 1580 he was arrested in London and committed to the Marshalsea prison. He was transferred to the Tower of London where he was alternately tortured on the rack and thrown out into the December snow. He was once kept upon the rack for five consecutive days without food. He was offered a bishopric if he would conform to the authorised religion, but refused.

On 20th November 1581, Ralph was tried at Westminster Hall, accused of treason. He wrote a letter to his uncle, John Woodward, saying, "Innocency is my only comfort against all the forged villainy which is fathered on my fellow priests and me." His last words were: "Jesu, Jesu, Jesu, esto mihi Jesus!" "Jesus, Jesus, Jesus, be to me Jesus (Saviour)".

When they were found guilty, St. Edmund Campion told the judges: "In condemning us you condemn all your own ancesters--all the ancient priests, bishops, and kings--all that was once the glory of England, the island of saints, and the most devoted child of the See of Peter. For what have we taught, however you may qualify it with the odious name of treason, that they did not uniformly teach? To be condemned with these lights--not of England only, but of the world--by their degenerate descendants, is both gladness and glory to us." Upon hearing the sentence of death, the three sang "Te Deum Laudamus".

At Tyburn Tree, St. Alexander Briant watched the brutal execution meted out to those found guilty of treason inflicted on Sherwin and Campion. It's hard to imagine the fortitude and faith necessary to witness such horrors and know that in a moment, you will endure the same--at least humanly speaking. Only the theological virtues of faith, hope and love grants that kind of strength.

These three holy men were canonized by Pope Paul VI among the Forty Martyrs of England and Wales in 1970.
Posted by Stephanie A. Mann at 12:30 AM