Mount Grace and The Lady Chapel 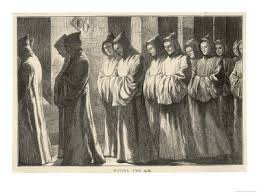 Of course it makes sense that when English Heritage posts information about 10 women from that country's history with connections to its various properties and attractions, some former monasteries or friaries would be mentioned. In this post from earlier this year (in March), the author starts with St. Hilda of Whitby--so that brings up Whitby Abbey; then Margery Kempe with her connection to Hailes Abbey AND Mount Grace Priory in Yorkshire. The article concludes with the life of Gertrude Bell and Mount Grace Priory again:

Our rundown ends with a woman who maybe ‘made it happen’ more than anybody else in the list, but will soon lose her claim to being ‘lesser-known’ thanks to two new films, Queen of the Desert, starring Nicole Kidman . . . and a documentary, Letters from Baghdad. After a fairly conventional upper class upbringing in County Durham, London, and then at Oxford University – with frequent country house weekends at her grandfather’s house, Mount Grace Priory – Gertrude Bell embarked on the travels that would occupy her extraordinary life. After long periods in Bucharest and Tehran, two round-the-world trips, and a number of unprecedented mountaineering expeditions, Bell became obsessed with the Middle East. Years of cultural immersion, writing and archaeological study alongside figures including T.E. Lawrence (of Arabia) followed, before she was recruited by British Intelligence during the First World War. Her expertise, and Lawrence’s, exerted a huge influence on British policy in the region, and both were invited to help determine the boundaries of the British mandate and the fates of nascent states such as Iraq in the aftermath of the war.

In addition to being one of the architects of its eventual borders, Bell became a powerful force in Iraqi politics; she could even be described as its kingmaker when her preferred choice, Faisal, was crowned King of Iraq in August 1921. Her focus soon returned to archaeology, however, and she became Honorary Director of Antiquities in Iraq, establishing its National Museum. It opened shortly before her death, in 1926. She has been described as ‘one of the few representatives of His Majesty’s Government remembered by the Arabs with anything resembling affection’.

Mount Grace Priory was a Carthusian house dedicated to the House of the Assumption of the Blessed Virgin Mary and St. Nicholas and founded by Thomas Holland, the First Duke of Surrey, in 1398. Mount Grace was well known for its preservation of great works of English spirituality.

Like the Carthusians of the Charterhouse of London and its priories at Beauvale and Epworth/ Axholme, some of the hermit monks at Mount Grace refused to take Henry VIII's Oath of Succession and thus were imprisoned by Henry. When the last prior at Mount Grace submitted the priory to Thomas Cromwell, Henry's Vice-Regent in spiritual matters, the hermit monks were released.

Where once there were nine Carthusian houses in England (two in Somerset--Witham and Hinton; two in Yorkshire--Kingston upon Hull and Mount Grace, Coventry in Warwickshire, Sheen in Surrey, Beauvale in Nottinghamshire, Epworth in Lincolnshire and the Charterhouse in London), now there is only one: St. Hugh's Charterhouse, Parkminster, West Sussex. The first Carthusian Charterhouse in England was founded by King Henry II in reparation for the murder of St Thomas a Becket. Just remember, the Carthusians were never, ever accused of any violations of their rule: they were exemplars of the monastic/hermetic vocation and Henry VIII and Thomas Cromwell DESTROYED THEM ANYWAY! Yes, those capital letters are well earned: I am shouting on the internet.

After Emancipation in 1829 and the Restoration of the Hierarchy in 1850, the order returned to England in 1873.

In 1515 a former Franciscan, Thomas Parkinson, entered the hermitage at the Lady Chapel, provided for by Katharine of Aragon, after whom the hotel in Osmotherley is named. He appears to have remained there until the dissolution of Mount Grace Priory in 1539. At that time the lands and buildings of the Priory passed into the possession of Sir James Strangways. Meanwhile, John Wilson, the last Prior of Mount Grace, was granted a pension and given the Lady Chapel in perpetuity. Following a brief period of exile during the reign of Edward VI, he returned to England with the accession of Queen Mary and entered the restored Charterhouse at Sheen, where he died. It is thought that by this time the chapel was unroofed and in ruins. However, it appears that a member of the Wilson family continued to hold the Lady Chapel and a Wilson was caught on pilgrimage there in 1611.

Despite the ruinous state, the Lady Chapel continued to attract pilgrims to a degree that alarmed the authorities in York, and on the eve of Little Lady Day, 7 September 1614, sixteen people were arrested and subsequently confessed to having prayed at the chapel.

Among those visiting the Lady Chapel were sisters of the Institute of the Blessed Virgin Mary, come to pray for their foundress, Mary Ward, who was gravely ill. Upon her recovery, she too made a pilgrimage to the chapel in thanksgiving. At the time one of the Sisters wrote: ‘The Chapel is to this day a [p]lace of great devotion, where many graces are granted, though so destroyed as only four walls remain without roof or cover; and… exposed to great winds. Yet there you shall find Catholics praying together for hours.’ Other pilgrims visiting the shrine during the Civil War period included the Jesuit priest John Robinson, who, three months after narrowly escaping the death penalty for a second time, wrote of returning ‘from a celebrated chapel of the Immaculate Virgin in the county of York’. This second escape, when actually on the scaffold, was the result of an order of Parliament bringing to an end the death penalty ‘for religion alone’.
Posted by Stephanie A. Mann at 12:30 AM