Chesterton at Kings (Frances, That Is) 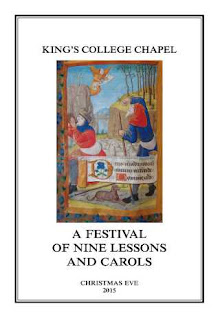 Each year I peruse the booklet for the Nine Lessons and Carols at the King's College Chapel in Cambridge to see what carols have been chosen and what the new commissioned carol is. Chesterton would approve of all that alliteration and this year Chesterton contributes to the program. Not G.K. Chesterton, but his wife, Frances Chesterton!

Here is the little door, lift up the latch, oh lift!
We need not wander more but enter with our gift;
Our gift of finest gold,
Gold that was never bought nor sold;
Myrrh to be strewn about his bed;
Incense in clouds about his head;
All for the child that stirs not in his sleep,
But holy slumber holds with ass and sheep.

Bend low about his bed, for each he has a gift;
See how his eyes awake, lift up your hand, O lift!
For gold, he gives a keen-edged sword
(Defend with it thy little Lord!)
For incense, smoke of battle red,
Myrrh for the honoured happy dead;
Gifts for his children, terrible and sweet,
Touched by such tiny hands, and Oh such tiny feet.

The music is by Herbert Howells. 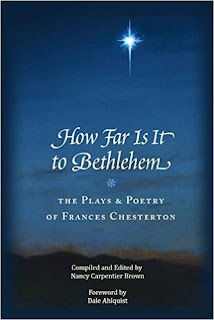 Our Greater Wichita chapter of the American Chesterton Society held a most festive meeting last Friday at Eighth Day Books: we read selections from collection by G.K. Chesterton called The Spirit of Christmas, of which I bought two copies last year (and gave one as a gift): it's as rare as hen's teeth now and the American Chesterton Society should reprint it as the companion volume to Frances Chesterton's collection, edited by Nancy Carpenter Brown, of poems and plays, How Far Is It to Bethlehem. You might say we had lessons without carols, but with many treats and great fun!

When my GKC group friends see this post, it may confirm us all more than ever that we should read The Woman Who Was Chesterton next, once we've finished reading and discussing The Well and the Shallows (and we can just about see the bottom of the well now).

A Festival of Nine Lessons and Carols is broadcast live on BBC Radio 4 on 24 December at 3pm (10:00 EST or 07:00 PST). The service is also broadcast at 2pm on Radio 3 on Christmas Day, and at various times on the BBC World Service.

In the United States the service is broadcast by around 300 radio stations, including American Public Media and its affiliates (Minnesota Public Radio and WNYC-New York, for example). Unfortunately there is no list of radio stations that are broadcasting the service, so it's best to contact your local stations or check their online listings.
Posted by Stephanie A. Mann at 1:00 AM