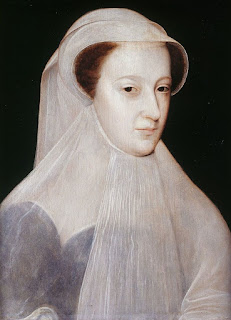 With the death of her husband, Francis II, on December 5, 1560, Mary, the Queen of Scotland entered a period of mourning and seclusion--just in case she was pregnant with her late husband's heir. As this website points out, however, that was as unlikely as the supposed pregnancy at the beginning of the reign:

About a month after Henry [II]’s death, Mary started to believe that she was pregnant. Given the accepted view that Francis was sterile, it is hard to envisage that she genuinely thought this. If true, it would have placed her in an unassailable position as the mother of a Valois heir. She would be positioned behind the throne in the event of her husband’s early demise. Yet by September she realised this was a false alarm. Although the Guises must have been disappointed, they made light of it, pointing out that a sixteen-year-old king and his young bride had plenty of time to produce children.

Yet Catherine and the Guises had great concerns about Francis’s well-being. They will have been well aware of his sexual shortcomings, with such matters being common knowledge within the inner circle close to the Crown. He was also increasingly unwell. His face had become blotchy and his continuing running nose and dizziness were caused by an abscess developing behind his ear. He progressively deteriorated for about a year before he died, and Catherine positioned herself in the event of having to face the worst. Already an adept political intriguer, she remained at Mary’s side showing her maternal kindness, while almost imperceptibly weaning her from her uncles’ influence, loosening their grip on power. She eventually became the principal force in government, Regent in all but name. Yet she too faced criticism. Pamphlets were describing her as a whore with a leper for a son. . . .

In mid-November, after hunting near Orléans, Francis complained of a recurring dizziness and a buzzing in his ear. On the following Sunday, he collapsed in church and had a swelling ‘the size of a large nut’from an abscess behind his ear, causing stabbing pains in his head. When the doctors lanced it, puss was discharged through his mouth and nostrils, providing temporary relief, but he remained gravely ill. By late November, he was suffering seizures and was unable to move or speak. Mary and Catherine nursed him between them and sought divine aid by walking in procession with his brothers to nearby churches. The doctors bled him, purged him with enemas including rhubarb and considered boring through his scull to relieve the pressure. This was averted when the discharge appeared to stop, only to be followed by another substantial eruption of puss from his ear, nose and mouth, which made him delirious. On the morning of his death on 5 December 1560, he was completely debilitated and, after lying prostrate all day, died in the late evening. He had not reached his seventeenth birthday. The lingering hopes of the Guises were left in tatters. Catherine de Medici had no further need to cosset her daughter-in-law, and Mary had little choice but to return to her kingdom in Scotland.

Mary was returning to Scotland after living in France for 13 years. Her mother, Mary of Guise, had died on June 11, 1560, and Scotland was in the grip of John Knox's Reformation. Mary and the Catholics at her Court would be able to attend Mass and receive the Sacraments (there would be priests at Court obviously) but she agreed not to oppose the Reformation--thus she would go home, the Dowager Queen of France and Queen of Scotland.
Posted by Stephanie A. Mann at 1:00 AM