The Prayer of Evening for the Golden Nights 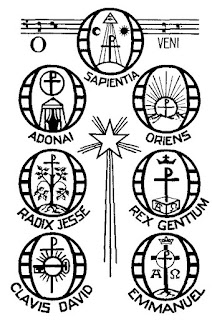 Each of the major Hours of the Divine Office has a canticle from St. Luke's Gospel: the Benedictus during Morning Prayer; the Nunc Dimittis during Night Prayer, and the Magnificat during Evening Prayer:

My soul proclaims the greatness of the Lord,
my spirit rejoices in God my Savior
for he has looked with favor on his lowly servant.
From this day all generations will call me blessed:
the Almighty has done great things for me,
and holy is his Name.

He has mercy on those who fear him
in every generation.
He has shown the strength of his arm,
he has scattered the proud in their conceit.

He has cast down the mighty from their thrones,
and has lifted up the lowly.
He has filled the hungry with good things,
and the rich he has sent away empty.

He has come to the help of his servant Israel
for he remembered his promise of mercy,
the promise he made to our fathers,
to Abraham and his children forever.

Starting tonight, the antiphons for that great Marian prayer, which Mary prayed when she, Elizabeth, the unborn Jesus and the unborn John the Baptist all met during the Visitation, are the great O Antiphons. As the USCCB site reminds us:

The Roman Church has been singing the "O" Antiphons since at least the eighth century. They are the antiphons that accompany the Magnificat canticle of Evening Prayer from December 17-23. They are a magnificent theology that uses ancient biblical imagery drawn from the messianic hopes of the Old Testament to proclaim the coming Christ as the fulfillment not only of Old Testament hopes, but present ones as well. Their repeated use of the imperative "Come!" embodies the longing of all for the Divine Messiah.

Each antiphon names a title of Jesus: Wisdom, Lord of Israel, Root of Jesse, Key of David, Dayspring, King of All the Nations, God With Us. More about the O Antiphons of these Golden Nights just before Christmas here.
Posted by Stephanie A. Mann at 1:00 AM