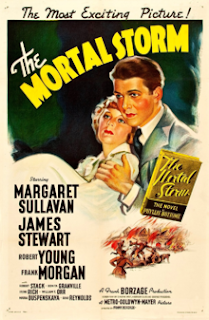 Last night, TCM showed one of my favorite movies: The Mortal Storm with Margaret Sullavan ("with an A") and Jimmy Stewart (billed as James Stewart). The New York Times reviewed the movie in 1941:

At last and at a time when the world is more gravely aware than ever of the relentless mass brutality embodied in the Nazi system, Hollywood has turned its camera eye upon the most tragic human drama of our age. In Metro's "The Mortal Storm," which opened yesterday at the Capitol, a grim and agonizing look is finally taken into Nazi Germany—into the new Nazi Germany of 1933, when Hitler took over the reins and a terrible wave of suppression and persecution followed. And, on the basis of recorded facts and the knowledge that its drama is authentic, this picture turns out to be one of the most harrowing and inflammatory fictions ever placed upon the screen.

There is no use mincing words about it: "The Mortal Storm" falls definitely into the category of blistering anti-Nazi propaganda. It strikes out powerfully with both fists at the unmitigated brutality of a system which could turn a small and gemütlich university community into a hotbed of hatred and mortal vengeance, which could separate the loving members of a family and hound two free-thinking young people into flight from their homeland and to death. It gives no quarter to the antagonists; from clear-eyed and apparently upright young men, they suddenly become heartless sadists at nothing more than the call of their leader's name, the infectious chant of a song. There is no question of why they become such. The fact that they are is assumed as a premise.

But so violent is the oppression meted out by the Nazis and so bitter and hopeless is the fate of those against whom it is aimed that even the spiritual satisfaction which might be derived from a story of heroic suffering is seriously impaired, especially in the light of current headlines. As propaganda, "The Mortal Storm" is a trumpet call to resistance, but as theatrical entertainment it is grim and depressing today.

The family involved is a mixed family: two non-Aryans (the father, played by Frank Morgan) and the daughter (played by Sullavan); the mother and her sons are protected by their Aryan blood and in fact the sons and their friends become Nazi's, while the father suffers because he will not, as a scientist and esteemed professor, accept that there is a difference between Aryan and non-Aryan blood. The reviewer is correct that the violence and bullying depicted in the movie make the viewer feel helpless and hopeless: you wish you could burst into the action and beat up Dan Duryea! You want to tell the two Roberts, Stack and Young, that they are destroying all they love! Directed by Frank Borzage.
Posted by Stephanie A. Mann at 12:30 AM