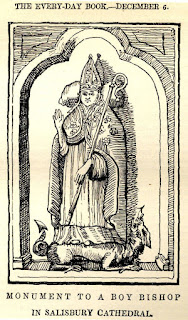 The medieval tradition of "ordaining" a Boy Bishop from among the choirboys:

In the Middle Ages the life of a chorister was harsh and severe. The daily routine was rigorous, food not over-plentiful and corporal punishment frequent. Thus one can imagine that once a year the prospect of feasts, power over their superiors and freedom to travel the diocese was looked forward to with the utmost expectation by these young boys.

The dates of these festivities varied greatly from diocese to diocese. Some started on 6 December (St Nicholas Day) and others on 28 December (Holy Innocents Day). A few continued from 6 December to 28 December without break.

The election of the Boy Bishop also varied from cathedral to cathedral. In some, the boys themselves elected their bishop but in others, especially as time went on, the bishop was elected by the clergy. He would be dressed in cope and mitre and carry a bishop's crook and his fellows would be attired in colourful robes.

This attracted enormous crowds to the cathedrals, all pressing to get a better view of the boys, also of the clergy descending from their accustomed seats and taking the lowest pews. During the exchanging of seats the canticle Magnificat was sung, also the office of Vespers during the ornate procession which wound its way round the whole cathedral with censers swinging in the light of many candles. After the service the boys would expect an enormous feast with wine.

At York the Boy Bishop and his young attendants would set off on horseback to tour the diocese, visiting monasteries and houses of the nobility where they were given money and presents. In most cathedrals the Boy Bishop preached a sermon carefully prepared for him by an adult for fear of what he might say if left to his own devices.

The real bishop and the Boy Bishop exchanged places during the Magnificat at specifically appropriate moment: the bishop would leave his cathedra at the phrase deposuit potentes de sede ("he hath put down the mighty from their seat"), and the Boy Bishop would take his seat at et exaltavit humiles ("and hath exalted the humble and meek").

Queen Elizabeth I finally put an end to this tradition. It was very popular and I think signifies confidence on the part of the Catholic bishops. Under certain controls, designating a Boy Bishop was the local ordinary "lightening up", not taking himself so seriously. The dates chosen for the Boy Bishop's time in office highlight youth. St. Nicholas of Myra's feast is on December 6 and he is a patron saint and protector of children; the Feast of the Holy Innocents remembers the little boys murdered by King Herod the Great in his attempt to kill Jesus, the newborn King. This is Merry Old England at its best.