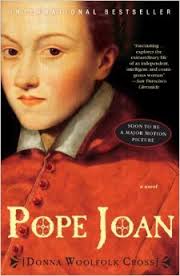 This morning on the Son Rise Morning Show, at about 7:45 a.m. Eastern/6:45 a.m. Central, Matt Swaim and I will conclude our Church History Apologetics series for the year with a consideration of the Legend of Pope Joan. Every so often there's a new book--or redesigned reissue of an older one--or a cable network documentary about the legend, which was first recounted in the thirteenth century, of a woman disguised as a man, who became pope in the eleventh century.

The old Catholic Encyclopedia entry sums up reputable historical reaction to the legend:

This alleged popess is a pure figment of the imagination. In the fifteenth century, after the awakening of historical criticism, a few scholars like Aeneas Silvius (Epist., I, 30) and Platina (Vitae Pontificum, No. 106) saw the untenableness of the story. Since the sixteenth century Catholic historians began to deny the existence of the popess, e.g., Onofrio Panvinio (Vitae Pontificum, Venice, 1557), Aventinus (Annales Boiorum, lib. IV), Baronius (Annales ad a. 879, n. 5), and others.

It is, nevertheless brought up again and again as a way to attack the male-only priesthood in the Catholic Church and the office of the Pope, the hierarchy of the Church, etc.
Posted by Stephanie A. Mann at 12:30 AM