'the true life of a man is in his letters' 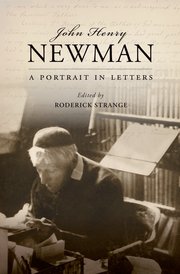 John Henry Newman was one of the most eminent of Victorians and an intellectual pioneer for an age of doubt and unsettlement. His teaching transformed the Victorian Church of England, yet many still want to know more of Newman's personal life. Newman's printed correspondence runs to 32 volumes, and John Henry Newman: A Portrait in Letters offers a way through the maze.

Roderick Strange has chosen letters that illustrate not only the well-known aspects of Newman's personality, but also those in which elements that may be less familiar are on display. There are letters to family and friends, and also terse letters laced with anger and sarcasm. The portrait has not been airbrushed. This selection of letters presents a rounded picture, one in which readers will meet Newman as he really was and enjoy the pleasure of his company. As Newman himself noted, 'the true life of a man is in his letters'. 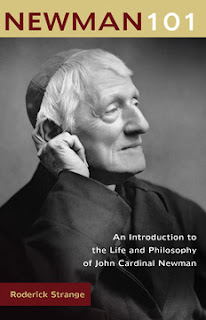 Strange is an excellent interpreter of Newman's life and thought. Next to Father Ian Ker and Edward Short, he is one of the best. Several years ago, I read his Newman 101 published by Ave Maria Press and reviewed it for Amazon:

Over the years I have read many books about Newman: biographies, studies, monographs. I have read Newman's major works and many of his sermons. I have taught classes on Cardinal Newman. When I picked up this book to read as a review before attending a seminar at Christ Church at the University of Oxford, I really did not expect to learn anything new.

With that preface out of the way--this book truly impressed me. Father Strange reveals Newman's influence and impact on his life and vocation as a priest in so many wonderful ways, so that the book has a very appropriate "heart speaks to heart" quality (Cor ad cor loquitor/Heart Speaks to Heart was Newman's motto as Cardinal).

He provides an excellent overview of Cardinal Newman's life and his major efforts and works. The chapter on Marian Doctrine and Devotion, not always a theme expected in an introductory study of Newman, was truly revelatory. Newman's apologetic for the dogma of the Immaculate Conception of Mary, like his explanation of the First Vatican Council's declaration on Papal Infallibility, provides a clear defense of the Church's teachings while placing them in their proper context of the Divine Economy of Salvation.

Father Strange also enlightens when describing Newman's understanding of God's providence in his life (and in the lives of all Christians), the course of Newman's sermons at the Church of St. Mary the Virgin during the Oxford Movement, his efforts to help the laity, and to advance Christian unity.

The last two chapters are perhaps the most extraordinary: a comparison of St. Thomas More and Venerable John Henry Newman as a meditation on sanctity and canonization and an analysis of Newman's epic poem, "The Dream of Gerontius".

The title may indicate that this book is on an introductory level, it's true (in the U.K. the title was "John Henry Newman: A Mind Alive" which does not have such a college course catalog flavor about it). The writing is clear and accessible, but the richness of Father Strange's introduction goes far beyond just an acquaintance or chance meeting--it reveals friendship and understanding. Highly recommended to anyone wanting to know more about Venerable (soon to be Beatified) John Henry Newman.
Posted by Stephanie A. Mann at 12:30 AM