The First Martyrs for Christ: The Holy Innocents 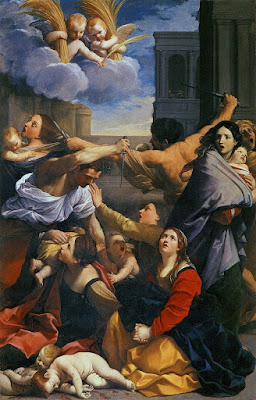 "The Coventry Carol" was part of a 16th century mystery play, "The Pageant of the Shearmen and Tailors", according to a 1534 prompt book by one Robert Croo, which enacted the events of Jesus's nativity story in St. Matthew's Gospel, depicting the slaughter of the young boys in Bethlehem as described in St. Matthew's Gospel, chapter 2, verses 16-18:Then Herod perceiving that he was deluded by the wise men, was exceeding angry; and sending killed all the men children that were in Bethlehem, and in all the borders thereof, from two years old and under, according to the time which he had diligently inquired of the wise men. Then was fulfilled that which was spoken by Jeremias the prophet, saying: A voice in Rama was heard, lamentation and great mourning; Rachel bewailing her children, and would not be comforted, because they are not. (Douai-Rheims translation).

O sisters too, how may we do,
For to preserve this day
This poor Youngling for
Whom we sing
By, by, lully, lullay?

Herod the king, in his raging,
Charged he hath this day
His men of might, in his own sight,
All young children to slay.

That woe is me, poor Child for Thee!
And ever morn and day
For Thy parting neither say nor sing,
By, by, lully, lullay.

Here is a performance from Westminster Cathedral.
Because Henry VIII proscribed these mystery plays, and the last authentic manuscript was burned in the 19th century, the words we have now are based on a transcription. There were two other carols in this play but we have only fragments of their texts.

Who knows what other treasures the world has lost because of that era of plunder and destruction?

There is another famous hymn for this Feast, very ancient, by Prudentius, Salvete flores Martyrum. The Catholic convert and Oratorian priest, Reverend Edward Caswall, translated the Latin thus:

Flowers of martyrdom, all hail!
Smitten by the tyrant foe
On life’s threshold – as the gale
Strews the roses ere they blow.

First to bleed for Christ, sweet lambs!
What a simple death ye died!
Sporting with your wreath and palms
At the very altar-side!

Honor, glory, virtue, merit,
Be to Thee, O Virgin’s Son,
With the Father, and the Spirit
While eternal ages run. – Amen.
Posted by Stephanie A. Mann at 12:30 AM