A Catholic Hamlet in a Protestant Denmark? 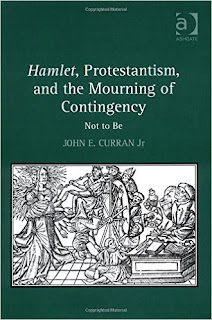 In First Things, Peter J. Leithart reviews a book about Hamlet and his "To Be or Not to Be" soliloquy:

Most readers and viewers of Hamlet take Hamlet’s most famous soliloquy as a meditation on suicide. In Hamlet, Protestantism, and the Mourning of Contingency, John E. Curran, Associate Professor of English at Marquette University, argues there are bigger things at work. Hamlet is opposing two ontologies, religious universes, moralities.

The first Curran labels “the Be.” The Be is the realm of predetermined fixity, without freedom, choice or contingency. It is an either/or, zero-sum world where every divine initiative must be at the expense of human merit, where signs and things stand in antagonistic opposition rather than seeking reconciliation. The Be is static, atemporal, a world within which human action is meaningless. In the Be, things stay what they are. The Be is cold, logical, technical, empty. The Be is a Protestant world.

Hamlet’s dilemma, according to Curran’s interpretation, is that of a man of Catholic sensibilities and aspirations who finds himself stuck in a Protestant world. In his heart, he is a man of the Not to be who wants to breathe free of the stifling stagnant air of Geneva or Wittenberg; but he learns, with growing frustration, that he lives in the Be. By the beginning of Act 5, he is resigned to the fact that the Not to be is not to be. After that, there is nothing more to say. Submitting to the Be leaves us speechless and dehumanized. The rest is silence.

Leithart has some problems with Curran's interpretation:

Curran’s book is filled with footnotes to both secondary literature on Hamlet and an abundance of primary and secondary literature on Elizabethan theology. He has read a lot, but despite the genuine erudition, Curran is no theologian. His portrayals of Catholic and Protestant “ontologies” amount to caricatures. He knows a few things about Protestant and Catholic theology, and extrapolates from those ideas to conclusions about what Protestants and Catholics – especially Protestants – must have believed. But the things he knows are not entirely accurate, and his extrapolations even less so. In characterizing Protestantism as steady-state determinism, for instance, he ignores the significant continuities between medieval Catholic and Protestant theologies, the prominent role of sanctification in Calvin’s and Puritan theology, the notion of regeneration. He ignores the cross as an epoch-making event. In fact, a plausible – I think convincing – argument can be made that one of Protestantism’s great contributions to the church was a rediscovery the historical dimension of Christianity.

Read the rest at First Things.
Posted by Stephanie A. Mann at 12:30 AM