Christmas and Easter Meet in Dickens' "A Christmas Carol" 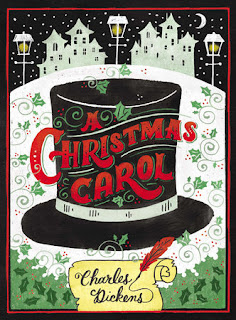 Justice and Mercy Meet. Marley suffers because of the man he made himself into: “I wear the chain I forged in life” and now fetters him eternally. The same fate threatens Scrooge, whose chain was “as heavy and as long as this seven Christmas Eves ago.” But that turn of justice is not something external, imposed by an angry God: it is rather that we reap what we have sown. The women justify theft of Scrooge’s deathbed curtains by his life: “Every person has a right to take care of themselves. He always did.” If he took care of himself, why can’t she? And if neglect breeds ignorance, despair, and death, then Tiny Tim’s fate is not imposed but ineluctable: “If these shadows remain unaltered by the Future, the child will die.” But if they are changed, if “courses be departed from,” things can be different. God lets us have what we want: we need to be sure it’s indeedreally what we want.

Kids love the “spirits” and thrills of A Christmas Carol, a story with an easily dislikable villain and a happy ending, a blend of Christmas and Halloween. One can reduce the Carol to that cartoon level. But there’s a greater richness in the story where, through the intervention of the supernatural, a man takes stock of himself and rises a new creature. It that sense, it’s a blend of Christmas and Easter.

G.K. Chesterton also noted the theme of "a man takes stock of himself and rises a new creature" in his study of Dickens, in which he notes that each of us, as much as Scrooge, need to undergo that process, that conversion:

And as with his backgrounds of gloom, so with his backgrounds of good-will, in such tales as "The Christmas Carol." The tone of the tale is kept throughout in a happy monotony, though the tale is everywhere irregular and in some places weak. It has the same kind of artistic unity that belongs to a dream. A dream may begin with the end of the world and end with a tea-party; but either the end of the world will em as trivial as a tea-party or that tea-party will be as terrible as the day of doom. The incidents change wildly; the story scarcely changes at all. "The Christmas Carol" is a kind of philanthropic dream, an enjoyable nightmare, in which the scenes shift bewilderingly and seem as miscellaneous as the pictures in a scrap-book, but in which there is one constant state of the soul, a state of rowdy benediction and a hunger for human faces. The beginning is bout a winter day and a miser; yet the beginning is in no way bleak. The author starts with a kind of happy howl; he bangs on our door like a drunken carol singer; his style is festive and popular; he compares the snow and hail to philanthropists who "come down handsomely;" he compares the fog to unlimited beer. Scrooge is not really inhuman at the beginning any more than he is at the end. There is a heartiness in his inhospitable sentiments that is akin to humour and therefore to humanity; he is only a crusty old bachelor, and had (I strongly suspect) given away turkeys secretly all his life. The beauty and the real blessing of the story do not lie in the mechanical plot of it, the repentance of Scrooge, probable or improbable; they lie in the great furnace of real happiness that glows through Scrooge and everything around him; that great furnace, the heart of Dickens. Whether the Christmas visions would or would not convert Scrooge, they convert us. Whether or no the visions were evoked by real Spirits of the Past, Present, and Future, they were evoked by that truly exalted order of angels who are correctly called High Spirits. They are impelled and sustained by a quality which our contemporary artists ignore or almost deny, but which in a life decently lived is as normal and attainable as sleep, positive, passionate, conscious joy. The story sings from end to end like a happy man going home; and, like a happy and good man, when it cannot sing it yells. It is lyric and exclamatory, from the first exclamatory words of it. It is strictly a Christmas carol.
Posted by Stephanie A. Mann at 12:30 AM