St. Damian the Leper Priest and his Defender 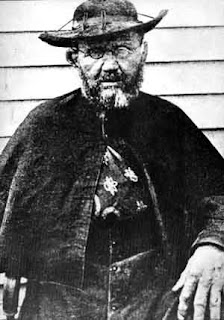 Today is the feast of St. Damian de Veuster, the missionary priest from Belgium who served the leper colony in Molokai, Hawaii. This site recounts the famous defense he received from Robert Louis Stevenson:

However, just months after Damien's death, when the Rev. C.M. Hyde's letter was published identifying Damien as "a coarse, dirty man, headstrong, and bigoted," accusing him of violating his vows, and expressing overall surprise that Damien should be seen as a "saintly philanthropist," one Robert Louis Stevenson, who was by now settled in Samoa, responded unambiguously.

The novelist appeared so bothered that though Hyde appeared to have acted with kindness towards him on more than one previous occasion, Stevenson now responded that his letter of rebuttal would represent the last correspondence he would ever have with the man.

Hyde perceived Damien as 'dirty.' Stevenson responded sarcastically saying 'he was.' Think of the poor lepers annoyed with this dirty comrade. But the clean Dr. Hyde was at his food in a fine house.' Hyde perceived Damien as 'coarse' to which Stevenson conceded the possibility, then suggested that Peter and John the Baptizer were hardly gentle and asked, “but you, who were so refined, why were you not there, to cheer them [the lepers] up with the lights of culture?"

Regarding the charge that Damien was not faithful in his vows, Stevenson claimed to have heard this rumour once before in Samoa when a man from Honolulu volunteered the details only to be shouted down by an angry hearer who allegedly was on Stevenson's record as saying:

Point by point Stevenson deconstructed Hyde's letter, eventually reducing Hyde's entire argument to one of jealousy, and expressing overall surprise that Hyde should still seek to be heard.

"Your Church and Damien's were in Hawaii upon a rivalry to do well: to help, to edify, to set divine example. You having (in one huge instance) failed, and Damien succeeded, I marvel that it should not have occurred to you that you were doomed to silence."

As this site recounts, the Rev. Hyde retracted his statements and made amends through donations to the leper colony:

Throughout the letter, Stevenson suggested that Hyde was in fact motivated by jealousy in that Catholics rather than Presbyterians were gaining converts due to their work amongst the lepers and also by hypocrisy, in that Hyde lived in comfort in his manse in Honolulu, while Damien lived a Spartan life on Molokai.

Stevenson even further argued that Hyde's letter, rather than serving to destroy Damien's reputation, would ultimately lead to his vindication and to his being proclaimed a saint of the Catholic Church, a prophecy which was to be fulfilled in 2009.

The letter had an almost immediate effect, with many, including the Prince of Wales (later Edward VII), donating money to the leprosium of Molokai. To his credit, Hyde realised he had gone too far and sought to redeem himself through organising donations to the work of the boys' home on Molokai.

Robert Louis Stevenson had been raised in a strict Presbyterian home in Scotland, but seems never to have reconciled himself to Calvinist TULIP doctrines. Chesterton admired Stevenson's work and published a critical study.
Posted by Stephanie A. Mann at 2:20 AM