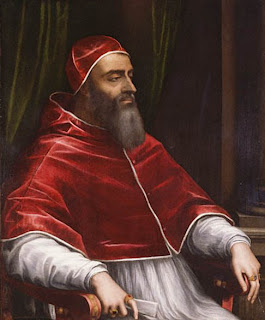 Giulio di Giuliano de Medici was born on May 26, 1478. He would serve as the Cardinal Protector of England from 1514 to 1523, when he succeeded Adrian VI as Pontiff, reigning as Pope Clement VII. In the former office he was succeeded by Lorenzo Campeggio, the last Cardinal Protector of England and in the latter office by Pope Paul III, born Alessandro Farnese.
As Pope Clement VII, of course, he ruled against Henry VIII in the latter's attempt to have his marriage with Katherine of Aragon declared null so he could marry Anne Boleyn. The position of Cardinal Protector of England was interesting preparation for this conflict, since it had been his role to defend the English view of ecclesiastical matters to the curia in Rome.

There were six cardinal protectors of England from the reign of Henry VII to Henry VII, ending of course with the break away from Rome in 1534. The first cardinal protector, Piccolomini, was also elected pope, reigning (briefly) as Pius III in 1503.
Posted by Stephanie A. Mann at 2:01 AM