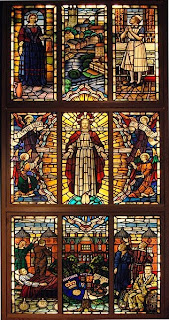 Florence Nightingale, the famed Lady of the Lamp, was born on May 12, 1820 and died on August 13, 1910. She was raised a Unitarian Universalist and yet at one time investigated the possiblity of joining a Catholic religious order. Nightingale, according to biographer Gillian Gill, saw that as a means to the end of becoming a professional nurse. Father Henry Manning, who had left the Oxford Movement and the Church of England to become a Catholic priest (and who would become the second Cardinal Archbishop of Westminster) corresponded with her.

Her Unitarian beliefs however prevented any serious consideration of conversion. When she went to the Crimea to assist the British military she did take Catholic sisters with her as nurses. There was some fear that the sisters would try to convert good Protestant men, weakened by their wounds and illness--so the Catholic sisters took care of the Irish Catholic soldiers.

As I recount in the second revised printing of Supremacy and Survival: How Catholics Endured the English Reformation, however, one of the English lay nurses who accompanied Nightingale, Frances Taylor, did become a Catholic after working with the Catholic sisters and Irish soldiers in Scutari. After returning to England she founded the Poor Servants of the Mother of God and Frances Taylor became Mother Mary Magdalene of the Sacred Heart. She wrote Tyborne: and the Gem of Christendom, one of the first Catholic historical novels about the English Reformation.

Florence Nightingale is honored by the Church of England on August 12 as a social activist, even though she was not even a Christian. As a Unitarian, she did not believe in the Holy Trinity, in the Divinity of Jesus Christ and in many other crucial Christian teachings. But she is an English heroine, so they honor her.
Posted by Stephanie A. Mann at 2:10 AM