Henriette Anne d'Angleterre and the Treaty of Dover 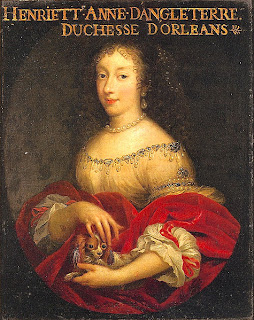 On May 26, 1670, Charles II and Louis XIV of England and France respectively, signed the Treaty of Dover, in which Charles promised to become a Catholic and Louis promised to pay him enough money to join in an alliance against Holland without having to summon Parliament for funds. Charles II's sister Henrietta, "Minette" or Madame as she was called at the French Court, had some influence upon this meeting at Dover.

The young princess had come to France with her mother Queen Henrietta Maria during the English Civil War. Raised at Court, she became a Roman Catholic and was married to Louis Dieudonne's brother Philippe. As Louis XIV's brother, Philippe was called "Monsieur" and Henrietta "Madame". She was a favorite of the King at Court and lauded for her beauty. Two of Louis's mistresses, Louise de la Valliere (who repented and became a Carmelite) and Francoise-Athenais, Madame de Montespan came from Henrietta's household.

Madame's marriage to Monsieur was not very happy, as he had male lovers and they both had affairs with the same man. She encouraged and attended the meeting of the two kings at Dover, returning to her homeland for the last time. After returning to France she went to Chateau St. Cloud, where she died on June 30, 1670. There was great suspicion of poison. She was buried in St. Denis.

After the death of Henry Benedict Cardinal Stuart, the Jacobite claim continued through Minette's daughter, Anne Marie d'Orleans, who married Victor Amadeus II, Duke of Savoy. Minette's daughter Marie Louise d'Orleans married the unfortunate Carlos II of Spain; she died at age 26 in circumstances much like her mother's. Monsieur married again--Elizabeth Charlotte, Princess of the Palatine, known as Liselotte. (Antonia Fraser's Love and Louis XIV clarifies all the relationships at the Sun King's Court.)
Posted by Stephanie A. Mann at 2:06 AM