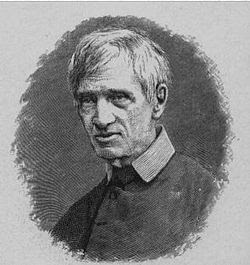 Mr. John Henry Newman, former Church of England clergyman, was ordained to the Catholic priesthood on Trinity Sunday, May 30, 1847 in Rome. (Bishop James D. Conley, Auxiliary Bishop of Denver, celebrates his third anniversary of ordination to the episcopate this year on the same date!--he was formerly pastor of my parish.) Newman had studied for ordination at the Propaganda Fidei. Part of his preparation had been the discernment of a particular path for his priestly vocation and he had chosen the Oratory of St. Philip Neri. This book by Placid Murray is very helpful to understanding why Blessed John Henry Newman decided to bring the Oratory Movement to England; for one thing he sought a community where his erstwhile Tractarians could be united.

When Pope Benedict XVI beatified Newman during his visit to England last September, he highlighted the Blessed's role as a priest in Birmingham:

While it is John Henry Newman’s intellectual legacy that has understandably received most attention in the vast literature devoted to his life and work, I prefer on this occasion to conclude with a brief reflection on his life as a priest, a pastor of souls. The warmth and humanity underlying his appreciation of the pastoral ministry is beautifully expressed in another of his famous sermons: "Had Angels been your priests, my brethren, they could not have condoled with you, sympathized with you, have had compassion on you, felt tenderly for you, and made allowances for you, as we can; they could not have been your patterns and guides, and have led you on from your old selves into a new life, as they can who come from the midst of you" ("Men, not Angels: the Priests of the Gospel", Discourses to Mixed Congregations, 3). He lived out that profoundly human vision of priestly ministry in his devoted care for the people of Birmingham during the years that he spent at the Oratory he founded, visiting the sick and the poor, comforting the bereaved, caring for those in prison. No wonder that on his death so many thousands of people lined the local streets as his body was taken to its place of burial not half a mile from here. One hundred and twenty years later, great crowds have assembled once again to rejoice in the Church’s solemn recognition of the outstanding holiness of this much-loved father of souls. What better way to express the joy of this moment than by turning to our heavenly Father in heartfelt thanksgiving, praying in the words that Blessed John Henry Newman placed on the lips of the choirs of angels in heaven:

Praise to the Holiest in the height
And in the depth be praise;
In all his words most wonderful,
Most sure in all his ways!
(The Dream of Gerontius).
Posted by Stephanie A. Mann at 2:02 AM