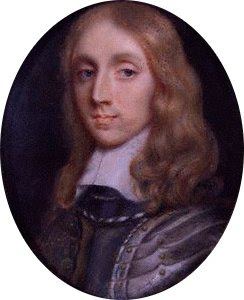 Oliver Cromwell's son resigned the office of Lord Protector of England on May 25, 1659--he had succeeded his father on September 3, 1658, so he had a short "reign". Richard Cromwell had never received the full support of the New Model Army because he lacked military expertise and he faced the same difficulties both his father and King Charles I had in dealing with Parliament, especially as the government was in desperate need of funds. With Parliament and the Army at conflict, Richard resigned and soon went to France in exile. He was nicknamed "Tumbledown Dick".

He was married to Dorothy Maijor and had inherited her father's Hursley estate in Hampshire. She did not share his exile, however. Richard used pseudonyms including "John Clarke" and wandered throughout Europe until 1680 or 1681. Then he returned to England, lived off profits from his estates and died on July 12, 1712 when he was almost 86 years old. Richard Cromwell was buried in All Saints in Hursley.