Rochester Cathedral and the Baker Saint 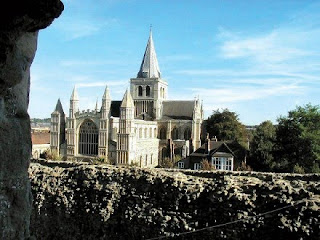 The Catholic Herald recounts the story of St. William of Perth, whose cult flourished at Rochester Cathedral:

William of Perth, who died in 1201, was very much a Scottish saint; his cult, however, is closely linked with the history of Rochester cathedral.

All that is known of William comes from John of Tynemouth’s Sanctilogium, written in the mid-14th century.

A baker by trade, William used to set aside every 10th loaf for the poor. Arriving for Mass early one morning, he discovered an abandoned child at the entrance to the church. He adopted the boy, who became known as “Cockermay Doucri” (David the Foundling), and whom he taught the arts of bakery.

Years later, in 1201, in fulfilment of a vow, William undertook a pilgrimage to Jerusalem, taking Cockermay Doucri with him. They stayed three days in Rochester; as they left the city, however, the apprentice lured his master into a remote spot – now near St William’s Hospital, on the road to Maidstone – and slit his throat, presumably for his few possessions. . . .

The madwoman who found his body was cured and William was buried in Rochester Cathedral. Because of other reported cures, his tomb became a pilgrimage site and the Cathedral was able to raise funds for rebuilding and expansion.

Of course, here is the punchline:

His shrine was destroyed on Henry VIII‘s orders in 1538. In 1883, however, a 13th-century wall-painting of William was discovered in Frindsbury church near Rochester.
Posted by Stephanie A. Mann at 2:00 AM