Sir Robert Shirley and His Chapel 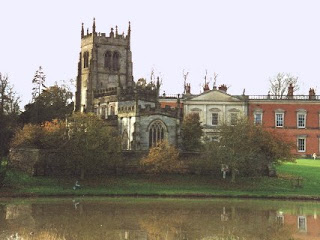 Father George Rutler recently celebrated a Solemn High Mass for Artists at the Church of Our Saviour in New York City. He sent out this weekly column afterwards:
FROM THE PASTOR
May 22, 2011
by Fr. George W. Rutler
In many ways New York is the artistic capital of the world, and we are in the middle of it. We certainly would be remiss if we did not foster this treasure, in the great Catholic tradition. Many visitors are surprised that much of the devotional art and ecclesiastical decoration in our church is the work of our own parishioners. If we can become an “atelier of the Lord,” it will be very much part of our Christian witness and stewardship.
Our Lord ascended to Heaven so that the Holy Spirit might come at Pentecost and fill the Church with His truth. The greatest art expresses that truth and is far superior to vain “self-expression.” John Keats said “Beauty is truth, truth beauty,” but T.S. Eliot rightly thought that the expression was meaningless sentimentality. The craftsman ignorant of the Creator becomes a vain aesthete expressing nothing more than the ego. While truth is beautiful, beauty is not truth itself but expresses that truth. In the classical tradition, beauty consists in proportion, integrity and clarity: it is harmonious, suited to its purpose, and intelligible. This is sublimely seen in Christ Himself, Who incarnated this beauty as the Way (guiding to a harmony of virtue) and the Truth (revealing God) and the Life (enlightening with creative love). St. Macarius, an Egyptian monk of the fourth century said, “The soul which has been fully illumined by the unspeakable beauty of the glory shining on the countenance of Christ overflows with the Holy Spirit . . . it is all eye, all light, all countenance.”
Art is not merely an option for the Christian. Thus, the wisdom of Lorenzo in The Merchant of Venice: “The man that hath no music in himself, Nor is not mov'd with concord of sweet sounds, Is fit for treasons, stratagems, and spoils . . .” The most sublime art is the Eucharist, in which we “take part in a foretaste of that heavenly liturgy which is celebrated in the holy city of Jerusalem toward which we journey as pilgrims . . .” (Vatican II, SC 8).
Last Sunday, our church was overflowing for a Solemn High Mass to inaugurate a Society of Catholic Artists, founded at the initiative of Catholic painters, musicians, actors and writers. Whatever will be realized from this, it certainly is a hopeful sign in an age whose potential has often been thwarted by a misuse of art to diminish the human spirit. May it someday be said of these good people what was inscribed on the wall of a church in Leicester, England, during the iconoclastic period of the Protectorate: “In the year 1654 when all things were, throughout this nation, either demolished or profaned, Sir Robert Shirley, Baronet, founded and built this church. He it is whose singular praise it is to have done the best things in the worst times, and to have hoped them in the most calamitous.”
Father Rutler is speaking here of the Ferrers Chapel of the Holy Trinity, Staunton Herald which is part of the National Trust. As artists often suffer for their art, Sir Robert Sidney certainly suffered for his patronage:
In the year 1653 no doubt owing to the overthrow of the Prayer Book services in the parish church, Sir Robert Shirley built a large and spacious church close to his own mansion at Staunton Harold. When it was completed the Lord Protector demanded a large sum of money from him on the ground that if he could afford to build a church he could afford to provide him with a regiment of soldiers. On his refusal he was imprisoned in the Tower and died suddenly soon afterwards.
Posted by Stephanie A. Mann at 2:05 AM