The Sun King Rises to the Throne 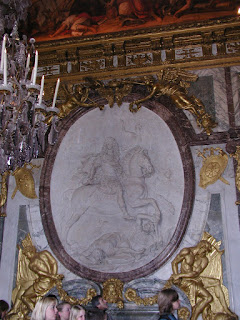 On May 14, 1643, Louis-Dieudonne succeeded his father Louis XIII to the thrones of France and Navarre (on the same date that Henry IV was assassinated in 1610). He would reign for more than 72 years! Just as Henry VIII had arranged a council for his heir, Edward VI, Louis XIII prepared for the reign of his minor son. And just as Henry VIII's will was thwarted by the Seymour family, Louis XIII' widow Anne of Austria got rid of the council, appointed herself sole regent, and worked with Cardinal Mazarin to rule France and Navarre. In 1661, Mazarin died and Louis XIV began his personal rule.

Elements of that personal rule included support of the Stuarts on the throne and in exile. His mother hosted Queen Henrietta Maria during the English Civil War, while he would host James II in exile after the Glorious Revolution, supporting his attempt to retake the throne and welcoming him back, sadly, after James's loss at the Battle of the Boyne. Louis XIV also recognized James III, the Old Pretender when James II died and again supported the attempt to regain the thrones of England and Scotland in 1715. By the time James III headed back from Scotland, however, Louis XIV was dead and he had to find a new home on the Continent.

We mustn't forget that Louis XIV's brother Philippe had married Henrietta of England and that Louis and Charles II agreed to the Treaty of Dover in 1670 with Henrietta's influence.

The picture is from our visit to Versailles several years ago: from the Salon of War.
Posted by Stephanie A. Mann at 2:03 AM