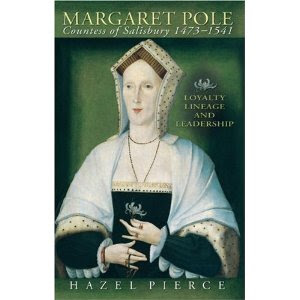 On May 28, 1541 Margaret Pole, Countess of Salisbury was executed on the orders of Henry VIII. She had been held in the Tower of London and was condemned to death without trial. There are reports that her execution was brutal as the axe man did not accomplish his mission with one blow, but hit her head and shoulders before decapitation.

Strange as it might seem to say, she and Anne Boleyn are kind of mirror images on either side of the cataclysms of Henry VIII’s reign, and have much in common:

Both were from royal families of England
o Margaret from the Plantagenet family (her father was the Duke of Clarence)—more royal blood than any Tudor!
o Anne from the Howard family

There are obvious differences between them too:

Margaret championed Catherine of Aragon and her daughter Mary, serving as the Princess’s governess and godmother

Anne harassed and threatened Catherine of Aragon and her daughter Mary, forcing the former Princess to serve her daughter Elizabeth

In her book The Lady in the Tower, Alison Weir points out that whatever her reputation for favoring reform of the Church, Anne Boleyn demonstrated conventionally Catholic views of the Sacraments of Confession and Holy Communion, receiving both before her execution and presenting her reception of them as evidence of her innocence to her jailer. (In effect, saying: ‘How could I receive Holy Communion before my death if I have the mortal sin of incest on my soul—which I have not confessed—condemning myself to Hell?’)

Margaret Pole might have been opposed to Henry’s actions against Catherine of Aragon and Mary, and the ascendancy of Anne Boleyn, but she and her family living in England were publicly aghast at her son Reginald Pole’s written remonstrance to Henry VIII which chastised him for his actions and his Supremacy as Head and Governor of the Church in England. Nevertheless Henry knew what side the Pole family was on and told the French ambassador he would destroy them.

These parallels also reflect how quickly things could change in Henry’s Court—as St. Thomas More called it, the Lion’s Den—in 1533, Margaret was in disgrace while Anne was at her height of power; in 1536, Anne was in disgrace and Margaret able to return to Court. Almost immediately, however, Henry VIII received 'De Unitate Ecclesiastica’ from her son Reginald Pole, which placed the entire family in danger. Margaret was first held under house arrest and then placed in the Tower of London in 1539. (Her son Henry, Lord Montague was executed on December 7, 1538.) Although the bill of attainder against her was passed in Parliament on May 12, 1539, it was not until another rebellion in the north against the Dissolution of the Monasteries occurred in April, 1541, that she was executed.

Reginald rejoiced that his mother was a martyr for the faith; she was beatified by Pope Leo XIII in 1886. Hazel Pierce’s biography Margaret Pole, Countess of Salisbury 1473-1541: Loyalty, Lineage and Leadership, is a model of scholarship and restraint; I have reviewed it on Amazon.com. I refer to Margaret Pole’s execution in Supremacy and Survival: How Catholics Endured the English Reformation in the context of Mary I’s accession to the throne. Margaret had been like a second mother to Mary; she had offered to stay with Mary at her own expense when Catherine of Aragon was sent away from Court. The horror of her death was certainly another sorrow for Mary before she was finally restored in stature and legitimacy by her first Parliament as Queen of England.
Posted by Stephanie A. Mann at 2:09 AM