Digest and Update of Last Year's Posts on the English Martyrs 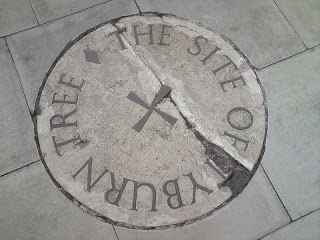 Because of my focus on Holy Week and on the beatification of Blessed John Paul II, I forgot to mention that I've been blogging for a year (as of April 18) so here are two posts from my 2010 commemoration of the English Martyrs:

A List of the Martyrs, including those canonized by Pope Paul VI and those beatifified by Blessed John Paul II; and

I have tried to find more information about a planned memorial near the site of Tyburn Tree; as of January in 2009, The Catholic Herald reported on a plan to supplement the plaque located in a traffic island hear Marble Arch in London--

A monument in honour of hundreds of Catholics executed for their faith is to be erected in the heart of central London.
Consultations are underway to instal a striking memorial on the former site of the Tyburn gallows at the western end of Oxford Street, the capital's busiest shopping street.
Between 1535 and 1679 nearly 400 Catholics were executed on the spot, and 105 of these have been recognised by the Vatican as martyrs, with a number canonised as saints.
Since the Fifties the site of the gallows has been marked simply by a stone roundel in a traffic island at the intersection of Edgware Road and Bayswater Road, near to Marble Arch, bearing the image of a plain black cross and the words: "The site of the Tyburn Tree."
But Westminster City Council has begun looking for ideas for a more fitting memorial. . . .
Tyburn became a place of public execution in the 12th century, and, as the "King's gallows", was used in particular for those people convicted of capital offences against the Crown.
The first martyrs of the Protestant Reformation - St John Houghton and companions - were executed together for treason there on May 4 1535 after they refused to accept King Henry VIII as the head of the Church in England.
In 1571 Queen Elizabeth I erected the Tyburn Tree, triangular gallows purposely built for multiple executions, with 24 men and women executed there together in one instance.
Catholics to die there included St Edmund Campion, the first English Jesuit martyr, who wrote in his "brag" to Elizabeth's Privy Council, that the Jesuits would never cease to work for the conversion of England "while we have a man left to enjoy your Tyburn".
The last Catholic Tyburn martyr was St Oliver Plunkett, the Archbishop of Armagh, executed on July 1 1679, the last of 25 innocent victims of the Titus Oates plot.
Most men were hanged, drawn and quartered - a slow death that involved castration and disemboweling before the head was struck off and the body quartered - but Catholic women, such as Mary Ward [sic--the writer meant Margaret Ward] and Anne Line, were hanged instead.
The Tyburn Convent honors the martyrs on their website.
Posted by Stephanie A. Mann at 2:39 AM