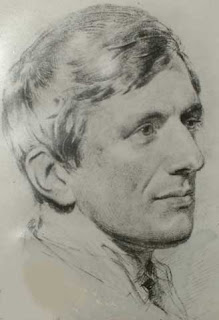 Sophie Scholl, White Rose objector to Nazi rule in Germany, was born on May 9, 1921; she was guillotined on February 22, 1943. Scholl is one of the most admired women in 20th Century German history--but what does she have to do with the subject of this blog?

According to this Catholic Herald story from 2009, she and her White Rose compatriots were very much influenced by Blessed John Henry Newman, particularly by his teachings on conscience:

New documents unearthed by German academics have revealed that the writings of the 19th-century English theologian were a direct influence on Sophie Scholl, who was beheaded for circulating leaflets urging students at Munich University to rise up against Nazi terror.

Scholl, a student who was 21 at the time of her death in February 1943, is a legend in Germany, with two films made about her life and more than 190 schools named after her. She was also voted "woman of the 20th century" by readers of Brigitte, a women's magazine, and a popular 2003 television series called Greatest Germans declared her to be the greatest German woman of all time.

But behind her heroism was the "theology of conscience" expounded by Cardinal Newman, according to Professor Günther Biemer, the leading German interpreter of Newman, and Jakob Knab, an expert on the life of Sophie Scholl, who will later this year publish research in Newman Studien on the White Rose resistance movement, to which she belonged.

The researchers also found a link between Scholl and Pope Benedict XVI in the scholar who inspired her study of Blessed John Henry Newman:

He added: "The religious question at the heart of the White Rose has not been adequately acknowledged and it is only through the work of Guenter Biemer and Jakob Knab that Newman's influence... can be identified as highly significant."

In his speech Fr Fenlon explained that Sophie, a Lutheran, was introduced to the works of Newman by a scholar called Theodor Haecker, who had written to the Birmingham Oratory in 1920 asking for copies of Newman's work, which he wanted to translate into German. . . .

It was through Haecker that the young Joseph Ratzinger - the future Pope Benedict XVI - learned to admire Newman, who died in Birmingham in 1890.

Conscience is a subtext throughout the history of the English Reformation and its aftermath--beginning with Henry VIII's "tender conscience" about having married his brother's widow. Robert Bolt's A Man for All Seasons centers St. Thomas More's heroism on his defense of the rights of conscience. Blessed John Henry Newman, as I've posted before, defended the rights and outlined the responsibilities of conscience, properly understood, in reaction to English concerns about the doctrine of Papal Infallibility.
Posted by Stephanie A. Mann at 2:05 AM