The Solemnity of Corpus Christi and the York Mystery Plays 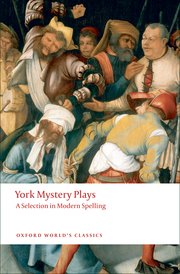 The Solemnity of Corpus Christi, the patronal feast of our parish, Blessed Sacrament Catholic Church, is on Sunday, June 19 this year. Since the Traditional Latin Mass is celebrated every Thursday at Blessed Sacrament, it will also be celebrated on Thursday, June 16! From the online parish calendar I see that a Corpus Christi Novena is planned with more details to come, and our annual parish festival will be celebrated on the weekend of the feast day. And by the way, our parish is one of the designated pilgrimage sites for our diocesan Year of the Eucharist!

I'm thinking about this feast, not just because it's one of my favorites feasts of the Liturgical Calendar, but because I saw this post from the Adoremus Bulletin in my Facebook feed. The author, Dr. Marcel Antonio Brown, describes the connections between the feast of Corpus Christi and the York Mystery Plays, beyond the fact that they were performed in honor of the feast. For example:

Joseph’s Trouble About Mary, sponsored by a guild which manufactured liturgical items such as thuribles, dramatizes Joseph’s difficulty in comprehending the Virgin-with-Child, the great mystery or sacramentum of Christ’s Body.[3] The wonder of Joseph becomes specifically Eucharistic in The Nativity when Mary welcomes the Christ-child with a litany used by the late-medieval lay faithful during the Elevation of the Host at Mass.[4] At the end of the play, Mary and Joseph lay the Christ-child in the manger while repeating together a vernacular version of the prayer prescribed for the priest’s quiet recitation in Latin (tacita voce) at the end of each Mass in accord with the rubrics of the York Missal.[5] The Nativity subtly shows that the Body of Christ, the Christ-child born in the stables at Bethlehem, is thus made present at every Mass, a miracle celebrated in sacred drama in York on Corpus Christi Day.

If you click on footnote #4, you'll see that Brown directs you to a source published in 1942:

Hayle, my Lord God, hayle prince of pees,
Hayle my Fadir, and hayle my Sone,
Hayle sovereyne sege all synnes to sesse,
Hayle God and man in erth to wonne!
Hayle, thurgh whos myht
All this worlde was first begonne,
Merknes and light.
This University of Rochester website provides some background on Levation Prayers, a devotion practiced by the laity during the Elevation of the Blessed Sacrament during the Canon of the Mass:
Since taking communion (that is, eating a consecrated host and drinking consec­rated wine) was not as common as it is in today’s Christian churches, the moment when the laity saw the host, known as the levation (or elevation), was their primary form of contact with the Eucharist. Ecclesiastical writers strongly emphasized the importance of the levation. A widely-circulated list of the benefits gained from seeing the host daily included promises that the worshipper would not suffer sudden death, a lack of food, or blindness on any day that he or she saw the consecrated host.2 Writers also required the laity to view the host with highly concentrated devotion. The statutes of Coventry suggest that the sacring bell is like “a gentle trumpet announcing the arrival of a judge, indeed of a savior,” and many authorities encouraged the laity to utter heartfelt prayers at the moment of the levation.3

These prayers exist in a variety of vernacular forms; as Russell Hope Robbins has argued, the heightened emotion of this moment required laity to pray in the language they knew best.4 Perhaps for the same reason, writers who offered their own suggestions for levation prayer stressed that it did not matter which version the laity used, so long as they prayed in some form.
These sacramental mystery plays, of course, were suppressed in England during the Reformation era. Brown also comments on the strange absence of the institution of the Eucharist in the 27th play of the cycle:
The bakers’ Last Supper, featuring the apocryphal character Marcellus leading the disciples to the Lamb’s Supper, contains a curious lacuna: at the moment of the institution of the Eucharist, the manuscript is corrupt. Richard Beadle, the world’s leading textual-bibliographical scholar of The York Plays, suspects “deliberate removal” of this section of the play.[8]
Thus hoping to hide from future generations the devotion of the English people in the past? How ridiculous, since the Catholic Mass was celebrated in secret in Recusant England and in public throughout Catholic Europe!
And the University of Rochester has this comment on that lacuna:

The Bakers were an obvious choice for the Last Supper since bread was an essential requirement for the institution of the Eucharist. No event in biblical history could be of greater significance in relation to the feast of Corpus Christi, which was a celebration of the Sacrament of the Eucharist in liturgical rite and procession as well as, at York, the plays. It is thus all the more unfortunate that, due to the loss of a leaf between lines 89 and 90, the central portion of the narrative with its representation of the blessing of the bread and wine is missing. The actions performed by Jesus at the table very likely were modeled on the gestures of the priest in consecrating the elements at Mass.
Please read the rest of Dr. Brown's article at the Adoremus Bulletin site, and two other articles, here and here, he wrote about York Mystery Plays.
This solemn feast is just a little more than a month away! Perhaps there's still time to read the Oxford World Classics modern language edition!
Posted by Stephanie A. Mann at 12:00 AM