Saint Thomas More and the Princes in the Tower 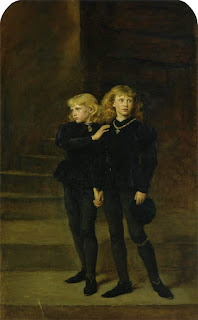 Saint Thomas More's History of King Richard III was rather important to her investigation of the mystery: did Richard III order their murder? did Thomas More have good reason to name the murderers? or did Henry VII murder the princes after he defeated Richard III on Bosworth Field? were the two Pretenders (Lambert Simnel and Perkin Warbeck) really the Princes?

Partisans for and against Richard III offer their opinions and Worsley tries to find documentation and evidence about the mystery.

I don't want to give away her conclusions, except to say that she does not agree entirely with Josephine Tey!

But Travis Curtright provides us with free resources, should you want to read a student edition of More's Richard III and a study guide.

One of the vignettes of this episode included her visit to Buckfast Abbey to view the hair shirt of Saint Thomas More, displayed there for public veneration since 2016. She questioned the authenticity of this relic, and Abbot David Charleswell, who had escorted her to the side altar, provided some explanation, but this blog gives much more detail:

In the century after More’s death a few competing stories sprang up about the hair shirt, and these are what I’m trying to unpick at the moment. One tradition has it that More sent the hair shirt to his daughter, the extraordinarily learned Margaret More Roper (1505–1544), who gave it to her equally learned sister by adoption, Margaret Giggs Clement (1508–1570), who later went into exile with her family to practice her faith, reportedly taking the hair shirt and other More relic-objects with her. Other traditions hold that Thomas More sent it to Giggs rather than Roper, who kept it until her death. Still other traditions state that he sent it to Giggs, who gave it to Roper, who returned it to Giggs, while another source claims that he sent it to his wife Alice. In any case, the hair shirt ultimately passed to Giggs Clements’ youngest daughter, Prioress Margaret Clement (1539–1612), a nun of the English convent of St Monica’s, founded in Louvain during the period when it was illegal to practice Catholicism in England. The nuns of St Monica’s claim to be More’s spiritual heirs through Margaret Giggs and her daughter Margaret Clement.

The hair shirt remained in Prioress Clement’s community and the communities descended from St Monica’s up until the 1980s, by which time most of the exiled English convents had returned to England. When I first began my doctoral studies in 2010 the exact whereabouts of the hair shirt were not clear. I recently discovered that when the modern-day St Monica’s convent closed, the hair shirt went to the Diocese of Plymouth for safe keeping. In 2011 it was transferred to Buckfast at the request of Abbot David Charleswell who arranged for it to be put on public permanent display at Buckfast starting in 2016.
So this first episode of Lucy Worsley Investigates provides almost as much information about St. Thomas More as it does about Richard III and the Princes in the Tower! It's interesting, also, that she finds more evidence about St. Thomas More than she does about the mystery she investigates.
Saint Thomas More, pray for us!
Picture credit (Public Domain): The Two Princes Edward and Richard in the Tower, 1483 by Sir John Everett Millais, 1878, part of the Royal Holloway picture collection. Edward V at right wears the garter of the Order of the Garter beneath his left knee.
Posted by Stephanie A. Mann at 12:00 AM