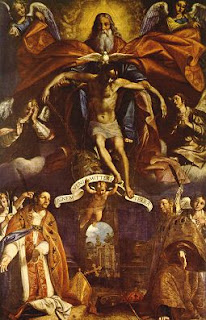 On Monday, November 22, I'll talk with Matt Swaim or Anna Mitchell about another of the Venerable English Catholic martyrs on the Son Rise Morning Show (at my usual time, 7:50 am. Eastern/6:50 a.m. Central). Please listen live on EWTN Radio or on your local EWTN affiliate at my usual time, 7:50 a.m. Eastern/6:50 a.m. Central.
In 1886 Pope Leo XIII declared 29 Martyrs of England and Wales to be Venerable. As Father John Hardon's Modern Catholic Dictionary defines the term, Venerable is the:
Title given to the Servants of God after the state of their heroic virtue or martyrdom has been proved and a solemn decree to that effect has been signed by the Pope. (Etym. Latin venerabilis, from venerari, to regard with religious awe.)
Venerable Edward Mico, SJ, is one of these martyrs to be regarded with religious awe. He is listed among the 44 martyrs celebrated at the Venerable English College every December 1 with Vespers and the chanting of the Te Deum in gratitude. He was arrested, not just because he was a priest in England, but a Jesuit priest in England during the Popish Plot hysteria during the reign of Charles II. According to the Jesuits in Singapore:
Edward Mico was born in Essex, England of Catholic parents. At the age of about fifteen, he enrolled at the English College in Saint-Omer, Flanders and about four years later, he went to the English College in Rome. There Edward became acquainted with the Jesuits and later managed to get the permission of the Jesuit Father General to enter the Society [of Jesus]. . . . He was ordained on March 31, 1657. . . .

[He] may have gone to the English mission as early as 1661. He carried out his priestly ministry in Hampshire, Wiltshire, Dorset and Sussex and served under three successive provincials during the last six years of his live. [sic]

Fr Mico accompanied Fr Thomas Whitbread, the English provincial when the latter visited the English Jesuit seminaries in Belgium in 1678.
Fathers Mico and Whitbread returned to England just as Titus Oates' Popish Plot was heating up. They were both ill in bed when Oates came to arrest them:
Before dawn of the morning of September 29, 1678, Oates and his armed soldiers forced their way into the Jesuit residence on Wild Street and found Frs Whitbread and Mico ill in bed and were told they were to sick to be moved. The Jesuit residence was next to that of the Spanish ambassador, Count Egmont and thus enjoyed the ambassador’s protection. Furthermore, Fr Mico was also the ambassador’s chaplain. When the soldiers insisted on taking the two priests to prison, the count appeared and forbade them to do so, threatening the intruders and reminded them that his property was immune from such searches. Oates, constrained by the ambassador’s demand, withdrew, leaving a dozen soldiers behind to guard against the two bedridden priests. As a departing gesture, some of the soldiers struck Fr Mico several times with their muskets and plundered his room looking for incriminating letters.
The exact date and location of Venerable Edward Mico's death is not clear; Joseph N. Tylenda, SJ, in his book Jesuit Saints and Martyrs: Short Biographies of the Saints, Blesseds, Venerables, and Servants of God of the Society of Jesus, Second Edition (Chicago: Loyola Press, 1998) notes that it might have been November 24, 1678 and that the name "Edward Micoe" is in the burial record for the church of St. Giles in the Fields on November 26, 1678, where other Popish Plot martyrs were buried, including the last victim, Saint Oliver Plunkett, the Archbishop of Armagh, Ireland.
Because Father Mico was bedridden, he never went to trial and may or may not have been moved to Newgate Prison. Father Thomas Whitbread was definitely tried and condemned, and executed at Tyburn on June 20, 1679--a most dramatic execution because he and the other four Jesuits were in the wagon with ropes around their necks when they were offered a pardon if they just admitted their guilt!
Venerable Edward Mico, pray for us!
Posted by Stephanie A. Mann at 12:00 AM