Tomorrow, Monday, November 8, I'll be on the Son Rise Morning Show to discuss the upcoming celebrations of the feast of Saint Martin of Tours, Armistice Day (in Europe) and Veterans Day (in the USA). Please listen live on EWTN Radio or on your local EWTN affiliate at my usual time, 7:50 a.m. Eastern/6:50 a.m. Central. You should have all your clocks set correctly for Daylight Savings Time by then! 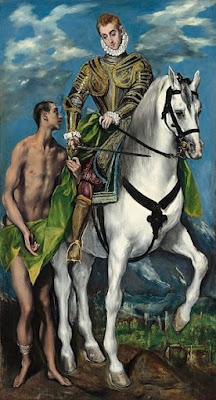 St. Martin of Tours is the first non-martyr saint canonized by the Church before there really was a process for canonization. He is a confessor for Christ. He is best known and most frequently depicted as a soldier mounted on a horse, handing half of his cloak to a beggar. (El Greco pictures him as a 16th century Spaniard.)  After his conversion, brought about by a visit from Jesus revealing Himself to have been that beggar, Martin left the Roman army, became a hermit, and eventually was ordained priest and bishop. We have an early life written by Sulpicius Severus, who knew him! Martin was born in Pannonia, which is now in Hungary, in 316 or 336 A.D. and had become a catechumen in the Church--when the preparation for receiving the Sacraments of the Initiation took much longer than it does now--before he began to serve the Emperor Julian (Julian the Apostate) in the Roman army.

Martin finally decided he had to chose between Jesus and Julian and he chose Jesus and refused to fight in a battle in Germany. He was jailed and offered to go unarmed at the head of the troops into battle but because there was peace treaty, was allowed to leave the army.

St. Martin upheld the Church's true doctrine about the Divine Person of Jesus Christ, opposing the Arians and supporting St. Hilary of Poitiers against those heretics. Martin established monasteries: Liguge Abbey and Marmoutier Abbey near Tours; he really wanted to live as a hermit or monk but was selected as the bishop of Tours in 371; he died on November 8, 397 and his cult spread quickly. More about Martinmas, one of those feasts that anchored the Medieval year in custom and liturgical observance:Famous for his generosity towards a drunken beggar, with whom he shared his cloak, St Martin is the patron saint of beggars, drunkards and the poor. As his feast day falls during the wine harvest in Europe, he is also the patron saint of wine growers and innkeepers.

As Martinmas coincided with the gathering in of the harvest, during the Middle Ages it was a time for feasting, to celebrate the end of autumn and the start of preparations for winter. Martlemass beef, salted to preserve it for the winter, was produced from cattle slaughtered at this time. Traditionally, goose and beef were the meats of choice for the celebrations, along with foods such as black pudding and haggis.

Martinmas is also a Scottish term day. The Scottish legal year is divided into four term and quarter days: Candlemas [February], Whitsunday [May], Lammas [August] and Martinmas [November]. On these days servants would be hired, rent would be due and contracts would begin or end. Traditionally therefore, Martinmas was also the time of hiring fairs, at which agricultural labourers and farm hands would seek employment.
Liturgically, the feast of St. Martin of Tours ends the Octave of All Souls Day, an intense period of prayer for Holy Souls in Purgatory.
Interesting note: Martin Luther was baptized on November 11, 1483, and thus was named for the saint!
Like Saint Joan of Arc, St. Martin of Tours was a popular saint in France during times of war and particularly in the First World War. In the November issue of the Magnificat prayer book, Anthony Esolen provides us with the link between the feast of St. Martin of Tours and Armistice Day, when the fighting of World War I ended on the Western Front and Germany surrendered.
Marshall Ferdinand Foch, the Supreme Allied Commander in Europe and Lord Admiral Rosslyn Wemyss, the British legate, met the representatives of Germany and Austria-Hungary in the forest of Compiegne early in the morning of November 11, 1918. As Esolen explains, the Armistice "will go into effect, by Foch's order, at 11 AM, the eleventh hour of the eleventh day of the eleventh month. Foch, whose brother [Germain] was a [Jesuit]priest, had in mind Saint Martin, that soldier for peace." (p. 206) 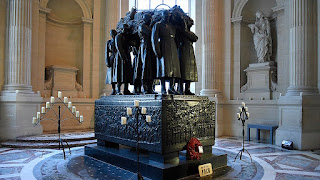 Between that early morning armistice and the cessation of battle, 2,738 men died.
Foch came to the United States in 1921 to be present at the groundbreaking ceremony of the Liberty Memorial in Kansas City, Missouri on November 1. On November 6 he was made the one millionth member of the Knights of Columbus during Mass at Holy Name Cathedral in Chicago, Illinois, and he was also present at the Armistice Day celebrations at Arlington Cemetery. Sadly, he knew the Armistice was not a true peace treaty; he predicted it would last only 20 years. He died on March 20, 1929 and is buried in the Hôtel des Invalides in Paris.
Image Credit (shared under a CC BY-SA 4.0): Tomb of Ferdinand Foch – Hôtel des Invalides
In 1954, Armistice Day, an official holiday in the USA since 1928, became known as Veterans Day, a Federal Holiday to honor all Veterans.
Saint Martin of Tours, pray for us!
Posted by Stephanie A. Mann at 12:00 AM