Saint Thomas de Cantilupe and the Pope Who Canonized Him

Today is the feast of St. Thomas de Cantilupe or St. Thomas of Hereford. The Once I Was a Clever Boy blog has an excellent post on his life and on the veneration of his shrine in the Cathedral of St. Mary the Virgin and St. Ethelbert the King (dating from the 11th to 13th centuries), and of course the destruction of his shrine during the English Reformation. From the 1911 Encyclopedia Britannica comes this biography:(c. 1218–1282), English saint and prelate, was a son of William de Cantilupe, the 2nd baron (d. 1251), one of King John’s ministers, and a nephew of Walter de Cantilupe, bishop of Worcester. He was educated at Paris and Orleans, afterwards becoming a teacher of canon law at Oxford and chancellor of the university in 1262. During the Barons’ War Thomas favoured Simon de Montfort and the baronial party. He represented the barons before St Louis of France at Amiens in 1264; he was made chancellor of England in February 1265, but was deprived of this office after Montfort’s death at Evesham, and lived out of England for some time. Returning to England, he was again chancellor of Oxford University, lectured on theology, and held several ecclesiastical appointments. In 1274 he attended the second council of Lyons, and in 1275 he was appointed bishop of Hereford. Cantilupe was now a trusted adviser of Edward I.; he attended the royal councils, and even when differing from the king did not forfeit his favour. The archbishop of Canterbury, Robert Kilwardby, was also his friend; but after Kilwardby’s death in 1279 a series of disputes arose between the bishop and the new archbishop, John Peckham, and this was probably the cause which drove Cantilupe to visit Italy. He died at Orvieto, on the 25th of August 1282, and he was canonized in 1330. Cantilupe appears to have been an exemplary bishop both in spiritual and secular affairs. His charities were large and his private life blameless; he was constantly visiting his diocese, correcting offenders and discharging other episcopal duties; and he compelled neighbouring landholders to restore estates which rightly belonged to the see of Hereford. In 1905 the Cantilupe Society was founded to publish the episcopal registers of Hereford, of which Cantilupe’s is the first in existence.
But what piqued my interest was the name of the pope who canonized him on April 17, 1320: Pope John XXII (Jacques Duèze or d'Euse), an Avignon pope. According to the 1913 Catholic Encyclopedia, he was:
Born at Cahors in 1249; enthroned, 5 September, 1316; died at Avignon, 4 December, 1334. He received his early education from the Dominicans in his native town, and later studied theology and law at Montpellier and Paris. He then taught both canon and civil law at Toulouse and Cahors, came into close relations with Charles II of Naples, and on his recommendation was made Bishop of Frejus in 1300. In 1309 he was appointed chancellor of Charles II, and in 1310 was transferred to the See of Avignon. He delivered legal opinions favourable to the suppression of the Templars, but he also defended Boniface VIII and the Bull "Unam Sanctam". On 23 December, 1312, Clement V made him Cardinal-Bishop of Porto. After the death of Clement V (20 April, 1314) the Holy See was vacant for two years and three and a half months. The cardinals assembled in Carpentras for the election of a pope were divided into two violent factions, and could come to no agreement. The electoral college was composed of eight Italian cardinals, ten from Gascony, three from Provence, and three from other parts of France. After many weeks of unprofitable discussion as to where the conclave should be held, the electoral assembly was entirely dissolved. Ineffectual were the efforts of several princes to induce the cardinals to undertake an election: neither party would yield. After his coronation Philip V of France was finally able to assemble a conclave of twenty-three cardinals in the Dominican monastery at Lyons on 26 June, 1316, and on 7 August, Jacques, Cardinal-Bishop of Porto, was chosen pope. After his coronation at Lyons on 5 September as John XXII, the pope set out for Avignon, where he fixed his residence. 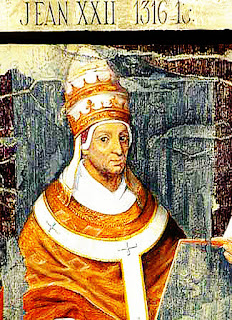 The reason Pope John XXII's reign interests me is because there is a connection to the English Reformation. When Pope John XXII suppressed the Franciscan Spirituals or Fraticelli the Franciscan philosopher William of Ockham protested against what he thought was Papal tyranny. As this website explains:

During the thirteenth century several popes had intervened in these controversies [about poverty and property], generally to support the Franciscans against their critics. Pope John XXII, however, intervened drastically on the other side. In several decretals issued between 1322 and 1324 he decreed that the Franciscans must themselves become the legal owners of the property they used and appeared to condemn as heresy the Franciscan doctrine that Christ and the Apostles had owned no property. Initially, Ockham steered away from active involvement in this conflict. But when ordered to read the relevant documents by his superiors in the Order, brother William came to the reluctant yet firm conclusion that John XXII had himself become a heretic. Most members of the Franciscan Order submitted to the Pope's decrees, but in 1328 the head of the Order (Michael of Cesena) and several others including William of Ockham broke with John XXII and eventually sought the protection of the "Roman Emperor", Ludwig of Bavaria, who was already in dispute with John XXII. (The pope claimed that no one could become Roman Emperor without the pope's approval and had excommunicated Ludwig for exercising imperial powers without approval; Ludwig had been elected by a majority of the Electors of the Empire and had defeated the other candidate in battle.) For most of the rest of his life Ockham lived in Munich (Ludwig's city), out of the pope's reach. There he produced various writings against John XXII and Benedict XII, including:

So what's the connection to the English Reformation? About six years ago, a collection of William of Ockham's works was found in the library at Lanhydrock in Cornwall, and researchers found annotations in the book that referenced texts that supported Henry VIII's efforts to establish his own authority over spiritual matters in England over the the pope's (at that time Clement VII). As this post on the Discover Britain website describes the discovery in 2015:
Dated 1495, the book is a summary of works by philosopher and theologian William of Ockham who was a major figure in medieval intellectual and political thought.

To help Henry VIII to gather evidence to support an annulment to his marriage, his agents scoured the country for texts such as Ockham’s which questioned the authority of the Pope and argued for the independence of the monarch.

The book at Lanhydrock contains marginal notes and marks which were made by Henry VIII’s secretarial staff to draw his attention to relevant passages.

The book has been at Lanhydrock for many years, but its direct connection to the Royal library was not known until Professor James Carley, an expert on the libraries of Henry VIII, was invited to examine some of the volumes in Lanhydrock’s collection.
Because William of Ockham thought that Pope John XXII (and his successor) had interfered in the Franciscan order and Ockham had appealed to Ludwig of Bavaria, Henry VIII's advisors found support for their monarch's authority in Ockham's works against the pope in the matter of his marriage to Catherine of Aragon.
Saint Thomas of Hereford, pray for us!
Image Credit (Public Domain): 1656 drawing by William Dugdale of ancient (13th. century?) stained glass windows then existing in the Church of St James the Great, Snitterfield, Warwickshire, showing a standing figure of Saint Thomas de Cantilupe (1220-1282), Bishop of Hereford
Image Credit (Public Domain): Unknown century 13th - Archives iconographiques du palais du Roure à Avignon
Posted by Stephanie A. Mann at 12:00 AM