This Morning: St. Thomas More and the Arrest of Jesus 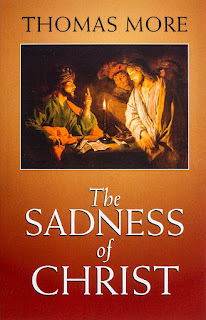 Just a reminder that I'll be on the Son Rise Morning Show with Matt Swaim this morning (Monday in Holy Week) to conclude our Lenten series on St. Thomas More's The Sadness of Christ.
I've offered him several topics to discuss as he chooses: More's wonder at the transformation in Christ from His soul being "sorrowful unto death" to being the Master of the situation when Judas and the cohort arrives; his concern about his contemporaries' methods of interpreting the Holy Bible without or even opposed to the Fathers and Tradition of the Church, leading to division; More's meditation on causing another to fall and die; and finally, his magnificent meditation on the verse from St. Luke's Gospel on the hour of power and darkness.

Since More describes the practice of some of his contemporaries to think they know more than the Fathers or the teaching authority of the Catholic Church to interpret scripture, you may wonder by what authority Thomas More interprets these passages from the four Gospels, if he is doing it on his own or based upon the Fathers and Tradition. This article by Travis Curtright describes More's sources, which are the Fathers via St. Thomas Aquinas and Jean Gerson's harmony of the Gospels:

Imagine Thomas More's cell in the Tower of London, what he calls his "shop," and his books, what he refers to as his "implements." In such a shop and with these tools, More produces his "goods," among which we count his De Tristitia Christi. (2) On June 12, 1535, the King's Council determines More's books shall be taken away from him. According to More's early biographer, Thomas Stapleton, More keeps his blinds drawn down day and night after that. When his jailer asks why, More replies: "Now that the goods and the implements are taken away, the shop must be closed." (3) Less than a month afterwards, More's trial and execution occurs. (4)

What are these "implements" that More values so much? We know he uses both the Catena aurea of Thomas Aquinas and John Gerson's Monotessaron as his "basic tools" for composing De Tristitia. The Catena is a compendium of exegetical comments by Church Fathers, which Aquinas compiles and condenses. His Catena aurea thereby becomes a "golden chain" of linked biblical commentary on specific sections of the gospel. The subtitle of Monotessaron is Unum ex quattuor, or "one from four," which indicates how Gerson integrates four gospels into one "harmony" by combining corresponding verses. More's obvious interest in the passion of Christ and his own imprisoned state leaves him with limited access to books and so he chooses his texts very carefully. Gary Haupt surmises that "nothing could more appropriately express More's intense concern with the unity of Christendom" than his selection of Gerson's harmony and Aquinas's collection of Church Fathers. (5) Unity among evangelists and within the tradition is symbolized in More's selection of texts and in the cause of his imprisonment.
At the end of The Sadness of Christ when St. Thomas More enters the debate among the doctors about exactly when Jesus was arrested, More chooses to disagree with Gerson and some of the other authorities:
But . . . in this one place I have departed from [Gerson] and followed those interpreters (and they too are celebrated authorities) who are persuaded by the very probable inferences from the accounts of Luke and John to adopt the opinion that only after Judas had given his kiss and returned to the cohort and the Jews, after Christ had thrown down the cohort . . ., after the ear of the high priest's servant had been cut off . . ., after all the apostles had escaped by running away . . .--only then, after all these events, did they lay hands on Jesus. (pp. 113-114)
All the quotations are from the Scepter edition of The Sadness of Christ, presenting the Yale University translation.
Sometime after St. Thomas More wrote those words Sir Richard Rich, Sir Richard Southwell, and Master Palmer came to his cell and laid hands on his book, pens, and, and paper and took them all away. At More's trial on July 1, 1535, Rich would perjure himself, but Southwell and Palmer would not back him up when he said that More had stated the Parliament could not declare Henry VIII Supreme Head and Governor of the Church of England.
Saint Thomas More, pray for us!
Posted by Stephanie A. Mann at 12:00 AM