This Morning: Thomas More on Angels, Bishops, and Judas 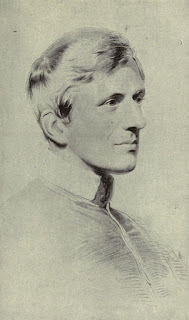 Just a reminder that I'll be on the Son Rise Morning Show with Anna Mitchell this morning to talk about St. Thomas More's The Sadness of Christ.
I've offered her several topics to discuss as she chooses: More's interpretation of the significance of the angel comforting Christ and the blood Jesus shed like sweat in His anguish; More's excoriation of the bishops sleeping while the faithful facing so many dangers; More's eloquent litany of the mercies Jesus extended to Judas for repentance.

So why do I have a picture of Newman on this post? Because as I read Michael Pakaluk's The Voice of Mary in the Gospel according to John, I discovered a Parochial and Plain Sermon by St. John Henry Newman, "A Particular Providence as Revealed in the Gospel."

In this sermon, Newman writes about the mercies Jesus showed to those He encountered depending upon their needs. Judas needed Jesus too, and as St. Thomas More commented in 1535 on all the mercies and opportunities He'd offered to Judas Iscariot, in 1835 St. John Henry Newman reminded his congregation of the"particular providence[s]" Jesus offered to His traitor:

The most winning property of our Saviour's mercy (if it is right so to speak of it), is its dependence on time and place, person and circumstance; in other words, its tender discrimination. It regards and consults for each individual as he comes before it. It is called forth by some as it is not by others, it cannot (if I may say so) manifest itself to every object alike; it has its particular shade and mode of feeling for each; and on some men it so bestows itself, as if He depended for His own happiness on their well-being. This might be illustrated, as is often done, by our Lord's tender behaviour towards Lazarus and his sisters, or His tears over Jerusalem; or by His conduct towards St. Peter, before and after his denial of him, or towards St. Thomas when he doubted, or by His love of His mother, or of St. John. But I will direct your attention rather to His treatment of the traitor Judas; both because it is not so commonly referred to, and, also, because if there was a being in the whole world whom one might suppose to be cast out of His presence as hateful and reprobate, it was he who He foresaw would betray Him. Yet we shall find that even this wretched man was followed and encompassed by His serene though solemn regard till the very hour he betrayed Him.

Judas was in darkness and hated the light, and "went to his own place;" yet he found it, not by the mere force of certain natural principles working out their inevitable results—by some unfeeling fate, which sentences the wicked to hell—but by a Judge who surveys him from head to foot, who searches him through and through, to see if there is any ray of hope, any latent spark of faith; who pleads with him again and again, and, at length abandoning him, mourns over him the while with the wounded affection of a friend rather than the severity of the Judge of the whole earth. For instance, first a startling warning a year before his trial. "Have not I chosen you twelve, and one of you is a devil?" Then, when the time was come, the lowest act of abasement towards one who was soon to betray Him, and to suffer the unquenchable fire. "He riseth from supper, and ... poureth water into a basin, and began to wash the disciples' feet," [John vi. 70; xiii. 4, 5.] and Judas in the number. Then a second warning at the same time, or rather a sorrowful lament spoken as if to Himself, "Ye are not all clean." Then openly, "Verily, verily, I say unto you, that one of you shall betray Me." "The Son of man goeth as it is written of Him; but woe unto that man by whom the Son of man is betrayed! it had been good for that man if he had not been born. Then Judas, which betrayed Him, answered and said, Master, is it I? He said unto him, Thou hast said it." Lastly, when He was actually betrayed by him, "Friend, wherefore art thou come?" "Judas" (He addresses him by name), "betrayest thou the Son of man with a kiss?" [Matt. xxvi. 24, 25, 50. Luke xxii. 48.] I am not attempting to reconcile His divine foreknowledge with this special and prolonged anxiety, this personal feeling towards Judas; but wish you only to dwell upon the latter, in order to observe what is given us by the revelation of Almighty God in the Gospels, viz., an acquaintance with His providential regard for individuals, making His sun to rise on the evil as well as on the good. And, in like manner doubtless, at the last day, the wicked and impenitent shall be condemned, not in a mass, but one by one—one by one, appearing each in his own turn before the righteous Judge, standing under the full glory of His countenance, carefully weighed in the balance and found wanting, dealt with, not indeed with a weak and wavering purpose, where God's justice claims satisfaction, yet, at the same time, with all the circumstantial solicitude and awful care of one who would fain make, if He could, the fruit of His passion more numerous than it is.

This solemn reflection may be further enforced by considering our Lord's behaviour towards strangers who came to Him. Judas was His friend; but we have never seen Him. How will He look, and how does He look upon us? Let His manner in the Gospels towards the multitude of men assure us. . . .
I'm sure you noticed that 300 years separated these works.
Great minds--great saints--think alike!
What a particular providence I read Pakaluk's book while engaged in this series for the Son Rise Morning Show!
Saint Thomas More, pray for us!
Saint John Henry Newman, pray for us!
Posted by Stephanie A. Mann at 12:00 AM