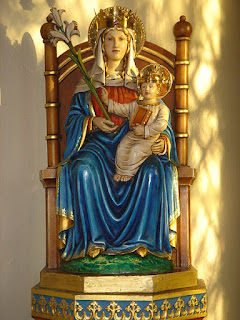 This is almost too timely: as statues of the Blessed Virgin Mary on church grounds, as well as public, not necessarily religious statues of Saint Junipero Serra and Saint Louis of France are threatened, defaced, desecrated, and destroyed, we have an historical example from the English Reformation to remember.

According to the Walsingham Blog's Facebook page today is the anniversary of the burning of many statues of the Blessed Virgin Mary--perhaps even including Our Lady of Walsingham--in 1538:


On the 14th of July 1538 Prior Vowell of Walsingham Priory reported to Thomas Cromwell that the royal commissioners had take the image of Our Lady from the chapel.

On July 18th the Image that had for centuries been loved and venerated in its Holy House, and where so much prayer and pleading had poured forth, reached London, along with statues of Our Lady of Basingstoke, Caversham, Ipswich, Penrhys, Willesden, Worcester and others. They were taken to the residence of the Lord Privy Seal , Thomas Cromwell, Chelsea Manor, where they were burnt in the presence of the Lord Privy Seal himself.

Chelsea Manor had been Saint Thomas More's home. It was no accident Cromwell chose that location.

Bishop Hugh Latimer, as Gary Waller recounts in his book The Virgin Mary in Late Medieval and Early Modern English Literature and Popular Culture (Cambridge University Press, 2011), rejoiced in the burning of these statues, proclaiming:


Here is confounded and overthrown the foolish opinion of the papists, which would have us to worship a creature before the Creator; Mary before her Son. These wise men do not so; they worship not Mary; and wherefore? Because God only is to be worshipped: but Mary is not God.

In 1538, in the late summer or autumn, in Chelsea or Smithfield or Tyburn, we can surmise – from both casual remarks recorded at the time and various histories and memoirs some years later – that one or more fires was lit and in it (or them) were burned statues, “images,” of the Virgin Mary, most probably those that had been brought from shrines dedicated to her at Doncaster, Ipswich, Penrhys, and Walsingham. Local records suggest that similar images from Caversham, along with roods from Bermondsey, Boxley, Islington, and others were added to this, or similar, fires elsewhere. In 1537, the reformist bishop Hugh Latimer had announced that in his own diocese there reigned “idolatry, and many kinds of superstition,” and during what Helen Parish terms 1538’s “long summer of iconoclasm,” he also named the statue of the Virgin at Worcester a “devil’s instrument.” He gloated that the statue, along with “her old sister of Walsingham, her young sister of Ipswich,” and statues from Doncaster and Penrhys, “would make a jolly muster” and, he added for good measure, unlike flesh-and-blood heretics, would not “be all day in burning.” There are conflicting accounts on the date or dates on which such a “jolly muster” took place, and exactly when and what “idols” were destroyed, whether publicly or privately, but, Latimer pronounced, they were destroyed because they had “been the instrument to bring many (I fear) to eternal fire.”

You might recall that Hugh Latimer preached a long sermon while Blessed John Forest was hanging in chains in preparation for his being burned alive on May 22, 1538, with a statue of a Welsh saint, Derfel Gadarn, being added to the pyre:

Father Forest was brought on a hurdle from prison in his tattered Franciscan habit to Smithfield and forced to hear Bishop Latimer’s sermon. After an hour’s preaching, Latimer asked Forest to respond. They argued and Forest even noted that he and Latimer had formerly agreed upon the important points of Catholic doctrine but that Latimer had succumbed to the offers of power and authority. He should instead have followed the examples of Thomas More and Bishop John Fisher. Either Latimer or Cromwell then cried out, “Burn him! Burn him!”—enraged by what English witnesses called his stubbornness.

Latimer was not the only one rejoicing at the debasement and destruction of the statues (from the BHO entry for the priory of Walsingham):

John Husee, writing to Lord Lisle, on 18 June, also attempted to be witty on the same subject:

This day our late lady of Walsingham was brought to Lambithe (Lambeth), where was both my Lord Chancellor and my Lord Privy Seal with many virtuous prelates, but there was offered neither oblation nor candle. What shall become of her is not determined. (fn. 57)

And Henry VIII, who had visited the Walsingham shrine in 1511, evidently approved of this iconoclasm:

Among the Lady Day accounts of 1538 [the Annunciation, March 25] the usual payments were made for the king's candle, and to the king's priest who sang before Our Lady at Walsingham. But when the Michaelmas payments came round the entry runs:

'For the king's candle before Our Lady of Walsingham, and to the prior there for his salary, nil.' (fn. 59)

Do not fear, however, because the prior, Richard Vowell, was well paid:

On 20 October, 1539, the late prior received a grant of the exceedingly large pension of £100 in reward for his obsequiousness and considerable bribes to Cromwell.

So as Catholics in the USA are reacting to what may be 2020's "long summer of iconoclasm", at least we may have the hope that justice may done to those who destroy private property. Otherwise, we must pray:

Our Lady of Walsingham, pray for us!
Posted by Stephanie A. Mann at 12:00 AM