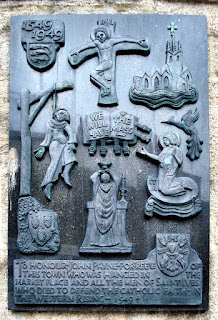 Just a reminder that I'll be on the Son Rise Morning Show at about 7:50 a.m. Eastern/6:50 a.m. Central to continue our series on the 40 Martyrs of England and Wales. Matt Swaim and I will discuss Saint Cuthbert Mayne, the protomartyr among missionary priests.

I mentioned in my preview post Friday that one point of interest in St. Cuthbert Mayne's story is that he was born and raised near Cornwall, a county on the western peninsula in England. He was born in Devon, but grew up influenced by the Cornish culture and mindset.

Cornwall was distant from London and the center of Elizabeth I's administrative state in more than miles. There was a language barrier--the people of Cornwall were protective of their language, Cornish, a Celtic tongue and had even arisen against the imposition of the ENGLISH Book of Common Prayer during the reign of Edward VI (1549). They'd had rather had Latin as the language of the liturgy rather than learn a "foreign" language for the celebration of Holy Mass and the Sacraments. During Mary I's reign, Catholic authorities recognized this, and Bishop Edmund Bonner's book of sermons to be read while the Catholic Church was being revived was translated into Cornish by John Tregear in 1555. The fact that the Church of England never undertook a translation of the Holy Bible into Cornish, the regional vernacular, led to the decline of the Cornish language.

It was also distant because of transportation barriers: there were few good roads. At the time of his execution, Launceston, near the border of Devonshire, was about as far as English authorities felt safe to go, and this situation lasted into the reign of William and Mary in the 17th century.

The Arundell and Tregian families in Cornwall had remained loyal to the Catholic Church and thus Saint Cuthbert Mayne had resided with Sir Francis Tregian. Tregian ended up in prison, lost his property and was finally pardoned by King James I, left England and died in Spain in 1608. Sir John Arundell of the Lanherne Arundells also suffered imprisonment and loss of property. According to the History of Parliament online:

In 1569 he refused to subscribe to the Act of Uniformity and in the following year he was obliged to enter a recognizance for his ‘good behaviour’, but it was not until 1577 that his Catholicism came to be looked upon as a source of danger to the realm. On 29 Nov. in that year Cuthbert Maine (sic), the seminary priest, was hanged at Launceston; in his speech from the scaffold he described Arundell as a ‘good and godly’ gentleman with the result that two weeks later Arundell, whose refusal to attend church had been noted, was placed under arrest. On his release he was required to live near London and took up residence in Clerkenwell. During his absence from Cornwall his house was searched and subsequently charges against him were laid before the Council in September 1579. In 1585 Arundell was lodged in the Tower, allegedly because of his association with his wife’s cousin, Philip Howard, Earl of Arundel. At the same time he was fined 1,000 marks in the Star Chamber for contempt of the proclamation regarding recusants. Released from the Tower in 1586, he went to live at Muswell Hill and remained there until the early months of 1590, when he was imprisoned at Ely. He was set free in the summer and settled in Isleworth, where he died on the following 17 Nov. His body was carried with great pomp to Cornwall and buried beside those of his ancestors at St. Columb Major, where a monument was later erected to his memory.6

Yet another widow of a Sir John Arundell, Lady Elizabeth  sheltered Blessed Hugh Green, who suffered an excruciating martyrdom on August 19, 1642 at the hands of an inept executioner.

We probably won't be able to address these matters during our brief discussion this morning, but it's fascinating background, demonstrating the loyalty of Catholic families in distant Cornwall when their faith was proscribed and they were definitely in the minority.

Image Credit (public domain): The memorial to John Payne, Portreeve of St. Ives, Cornwall, who was hanged by the Provost Marshall for being a participant in the Prayer Book Rebellion in 1549 (not to be confused with the St. John Payne who came back to England with St. Cuthbert Mayne as a missionary priest--but a wonderful coincidence!)
Posted by Stephanie A. Mann at 12:00 AM