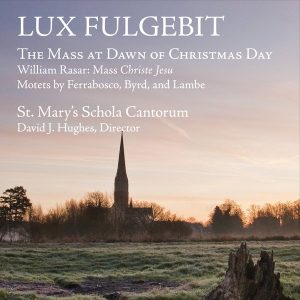 In response to my post at the National Catholic Register on liturgical music, a representative from the Church of St. Mary's in Norwalk, Connecticut reached out to me through the blog editor and offered me a review copy of Lux Fulgebit. This is the first CD released by the parish's Schola Cantorum, and I hope it is not the last.

The title refers to the Introit of the Mass at Dawn of Christmas Day--which is the only Mass on that day that also celebrates St. Anastasia, who was martyred on December 25, 304 during the persecution by Diocletian (she is listed among the early martyrs in the Roman Canon)--and combines plainchant with a sixteenth century, pre-English Reformation setting of the Mass.

The setting of the Mass, Christe Jesu, is by William Rasar, who was a clerk at King's College, Cambridge and whose only surviving work is this Mass, found in the Peterhouse Partbooks (incomplete, missing the tenor part) and the Forrest-Heyther Partbooks (complete). The CD presents all the parts of the Mass, from the Introit to the Post-Communion Prayer and dismissal, and also includes three motets, one each by Alfonso Ferrabosco, William Byrd, and Walter Lambe. The parish's priest, Father Richard G. Cipolla, chants all the parts proper to his role: the Collect, Epistle, Gospel, Preface, etc (note: no Secret, which is prayed silently in the Extraordinary Form).

The liner notes by Charles Weaver, one of the Schola singers, conclude with these comments:

This recording is not a reconstruction of an historical liturgy at which the Rasar Mass was first sung. The Sarum rite used in England at the time did not contain the Christmas Mass at dawn, and prior to the Reformation, men and women never sang together in church: boys provided the treble part. In the most important musical establishments there would have been several singers on each part. On the other hand, it is easy to imagine a small mixed ensemble like ours singing in a private Mass during the Elizabethan period. More importantly, this is a presentation of sixteenth-century liturgical music in a living context: the modern liturgy of the Roman Church in continuity with that of the sixteenth century, in which we sing every week at St. Mary’s Norwalk. The liturgical reforms of the mid-twentieth century, like those of Edward and Elizabeth, have nearly put an end to the Church's musical continuity with the past. The liturgy was greatly simplified, to invite the greater participation of the faithful, but in practice this meant discarding much music in Latin, including the plainchant that had been the backbone of the church’s liturgical prayer for over a millennium. This was unintentional, as many ecclesiastical documents have made clear: chant and sacred polyphony are treasures of the Church, quite apart from their obvious objective value as great achievements of human civilization. At small parishes like St. Mary’s Norwalk, the important work of keeping this music alive is happening: not preserving it as in a museum, but in the life of a community at prayer. Thanks to the support of the people of St. Mary’s, the Mass Christe Jesu has now been recorded for the first time.

The CD is available from the church's website, which provides excerpts from the Mass and other background materials. This recording, beginning with the cover photo on the booklet, is a great spiritual and historic accomplishment. We will add it to our prayers on Christmas Day!
Posted by Stephanie A. Mann at 12:30 AM