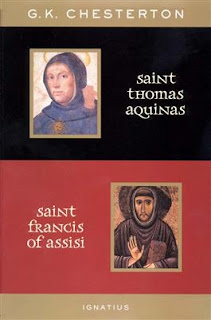 Our G.K. Chesterton reading group reconvenes tonight at Eighth Day Books to begin our discussion of Chesterton's Saint Thomas Aquinas. We will discuss the Introduction and the first three chapters. Dale Ahlquist offers an overview in his Chesterton 101 series at the American Chesterton Society:

Evelyn Waugh claimed that G.K. Chesterton never actually read the Summa Theologica. He simply ran his fingers over the binding and absorbed its content. It is certainly as good a legend as Dorothy Collins’ account of Chesterton dictating half the book of St. Thomas Aquinas to her, stopping, asking her to get some books (“What books?” “I don’t know”), her returning from London with a stack of books, him paging rapidly through one of them, taking a walk in his garden, entering his study and saying “Shall we do a little Tommy?” The journalist then proceeded to dictate the rest of the book that put all Thomistic scholars to shame. Etienne Gilson praised it as the best book ever written on St. Thomas Aquinas.

Chesterton begins by comparing Aquinas with St. Francis of Assisi. In spite of their obvious contrasts, he says, “they were really doing the same thing. One of them was doing it in the world of the mind, the other was doing it in the world of the worldly… They were doing the same great work; one in the study, the other in the street.” Neither of them brought anything new to Christianity. Rather, they brought Christianity closer to the kingdom of God. In the process, each of them “reaffirmed the Incarnation, by bringing God back to earth.”

The American Chesterton Society also provides this article by Chesterton, published in The Spectator (1932), in which he sums up Saint Thomas Aquinas's importance:

To understand his importance, we must pit him against the two or three alternative cosmic creeds: he is the whole Christian intellect speaking to Paganism or to Pessimism. He is arguing across the ages with Plato or with Buddha; and he has the best of the argument. His mind was so broad, and its balance so beautiful, that to suggest it would be to discuss a million things. But perhaps the best simplification is this. St. Thomas confronts other creeds of good and evil, without at all denying evil, with a theory of two levels of good. The supernatural order is the supreme good, as for any Eastern mystic; but the natural order is good; as solidly good as it is for any man in the street. That is what”settles the Manichees.” Faith is higher than reason; but reason is higher than anything else, and has supreme rights in its own domain. That is where it anticipates and answers the anti-rational cry of Luther and the rest; as a highly Pagan poet said to me: “The Reformation happened because people hadn’t the brains to understand Aquinas.” The Church is more immortally important than the State; but the State has its rights, for all that. This Christian duality had always been implicit, as in Christ’s distinction between God and Caesar, or the dogmatic distinction between the natures of Christ. But St. Thomas has the glory of having seized this double thread as the clue to a thousand things; and thereby created the only creed in which the saints can be sane. It presents itself chiefly, perhaps, to the modern world as the only creed in which the poets can be sane. For there is nobody now to settle the Manichees; and all culture is infected with a faint unclean sense that Nature and all things behind us and below us are bad; that there is only praise to the highbrow in the height. St. Thomas exalted God without lowering Man; he exalted Man without lowering Nature. Therefore, he made a cosmos of common sense; terra vientium; a land of the living. His philosophy, like his theology, is that of common sense. He does not torture the brain with desperate attempts to explain existence by explaining it away. The first steps of his mind are the first steps of any honest mind; just as the first virtues of his creed could be those of any honest peasant. For he, who combined so many things, combined also intellectual subtlety and spiritual simplicity; and the priest who attended the deathbed of this Titan of intellectual energy, whose brain had torn up the roots of the world and pierced every star and split every straw in the whole universe of thought and even of scepticism, said that in listening to the dying man’s confession, he fancied suddenly that he was listening to the first confession of a child of five.

We meet at 6:30 p.m. and refreshments will be served!! If you are in Wichita, Kansas or its environs, come join the Greater Wichita local branch of the American Chesterton Society, settling the Manichees and rejoicing in the Resurrection!
Posted by Stephanie A. Mann at 12:30 AM