My Review of Alison Weir's "Elizabeth of York" 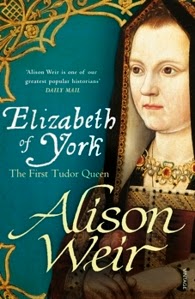 I read this book on my Kindle, inspired by Elena Maria Vidal's review on her Tea at Trianon blog.

Elizabeth of York was like a hinge between the Plantagenets and the Tudors. Henry VII married her to strengthen his claim to the throne of England by conquest and yet he delayed both their wedding and her coronation in the attempt to assert it was his claim on the throne that mattered, not hers. (But it was really hers that mattered.)

Haunting both Elizabeth's "reign" as Queen and Henry's rule as King were her little brothers, Edward V and Richard, the Duke of York. Richard III had bastardized all of Edward IV's children, including Elizabeth, in Parliament--claiming that Edward had a pre-existing marital contract--and had held Edward and Richard in the Tower of London. They were reportedly killed there by orders of Richard III, yet their remains had never been found. Henry VII tried to find them; Elizabeth, as Weir notes, must have always wondered what happened to her brothers, who came before, as males, in the line of succession.

Weir introduces various other mysteries along the way through this biography: would Elizabeth really have wanted to marry Richard III? did Henry VII dislike Elizabeth's mother, Elizabeth Woodville? did Elizabeth and Margaret Beaufort, Henry's mother, get along or not? why did Queen Elizabeth of York go to Wales while pregnant and ill?, etc. She presents various pieces of evidence, analyzes their sources, presents her opinion, but ultimately leaves it to the reader to decide unless she is certain of the answer. At first--and she followed that process in another of her books I've read, The Lady in the Tower, about the fall of Anne Boleyn--this process frustrated me because it seemed to interrupt the flow of the narrative. But I have grown to accept and appreciate her letting me in on the process of thinking about the past, disputed information, and sources.

I recommend Elizabeth of York: The First Tudor Queen to those who want to know more about the world of the Tudors as well as those who want to know more about Elizabeth. Alison Weir describes the structures and finances of the Tudor Court with vivid detail. Well illustrated. No index in the Kindle edition; I don't like not having an index!
Posted by Stephanie A. Mann at 12:30 AM

Email ThisBlogThis!Share to TwitterShare to FacebookShare to Pinterest
Labels: Alison Weir, book reviews, Catholic England, Elizabeth of York, Tea at Trianon, The Princes in the Tower, The Tudor Dynasty