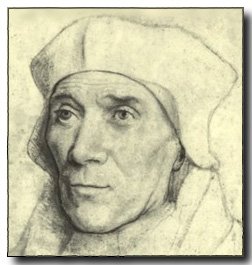 Author Nancy Bilyeau writes at the English Historical Fiction Authors blog about the execution of the cook who attempted to poison Bishop John Fisher. Richard Roose confessed to the crime of poisoning the Bishop's soup but said that it was just supposed to make him or anyone who ate it sick, and that it was just a joke. Such jokes were not funny at that time. Although there's some irony in a cook being boiled to death, the way the punishment fit the crime wasn't funny either:

On April 5, 1531, hardened spectators of public punishment gathered at Smithfield, joined, perhaps, by others who were too ghoulish or genuinely curious to stay away. For an execution had been announced of a type that none had witnessed in their lifetimes, nor ever heard of.

The condemned man, Richard Roose, was not of the magnitude of criminal expected to meet his end at Smithfield. . . .

Roose, the victim of 1531, had not sought to harm King Henry VIII nor Queen Catherine nor any royal councilor. He had not tried to overthrow the nation's government nor change its religious policies. The charge was murder. Roose, a cook in the service of Bishop John Fisher, was accused of murder by poison, his victims an obscure gentleman in the bishop's household and a destitute widow. He is believed to have admitted to the poisoning but claimed it has a joke gone wrong, an accident. There is no testimony to examine because Roose had no trial, by command of Henry VIII. . . .

The murder motive and the question of a larger plot were soon obscured by Henry VIII's drastic actions. He decided that Roose should be condemned by attainder without a trial--a measure usually used for criminals who were at large. Roose was in prison. And a bill was passed in Parliament making boiling a form of legal capital punishment for poisoning. This crime was especially heinous, the king's representatives said.

Chapuys questioned the King's actions in his letter to Emperor Charles. Regardless of the "demonstrations of sorrow he makes he will not be able to divert suspicion."

But no accusations were made, of course. And in April the crowds of Smithfield witnessed Roose's death, to their horror. According to an eyewitness:

"He roared mighty loud, and divers women who were big with child did feel sick at the sight of what they saw, and were carried away half dead; and other men and women did not seem frightened by the boiling alive, but would prefer to see the headsman at his work."

Anne Boleyn was implicated by rumor in the attempt on Bishop Fisher's life--and there is record of another attempt at assassination when a shot was fired at his house at Lambeth. Was Henry VIII covering something up? As Bilyeau demonstrates, Henry had admired and valued Fisher, but once the latter opposed him on the matter of the divorce, that regard dissipated. The Oxford Dictionary of National Biography describes the acts of attainder used against Bishop Fisher before his trial for treason:

That the regime might well by this stage have entertained the most profound suspicions about Fisher's loyalty is shown in the way that he was implicated in the proceedings now being taken against the Holy Maid of Kent. After she had been induced to confess publicly to fraud, proceedings were expedited by act of attainder, and Fisher was by the same act convicted of ‘misprision of treason’ and sentenced to confiscation of goods and imprisonment at the king's pleasure for having concealed the predictions she shared with him (these were all of course, as Fisher vainly pleaded in his own defence, public knowledge). Even now the regime had not abandoned all hope of—if not winning Fisher over—at least cowing him into submission. Had he been willing to take the ‘oath to the succession’ (an oath required in 1534 of all adult males, recognizing Henry's divorce and second marriage, and implicitly repudiating papal authority), he would doubtless have been restored to full honours. But he was not, and in April he was therefore confined in the Tower of London. About the end of the year a further act of attainder deprived him of his preferments, including the see of Rochester. In the course of 1535 pressure was put on him to affirm or deny Henry's status as ‘Supreme Head of the Church of England’ (which had been recognized by act of parliament late in 1534). Eventually, he seems to have uttered a denial of this title (possibly elicited by chicanery), which left him liable to the penalties of high treason under a new treason act passed that year. And so in June 1535 he was indicted, tried, convicted, sentenced, and, on Tuesday 22 June, decapitated on Tower Hill. His death, which Catholic Europe unanimously interpreted as martyrdom, was of no small importance in perpetuating after his death the reputation as a theologian which he had acquired earlier in his life. Now his witness against the innovations of his time was sealed in the blood of martyrdom—and death for the truth was no longer the exclusive preserve of the protestant reformers.
Posted by Stephanie A. Mann at 12:30 AM