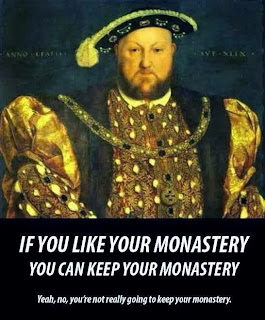 This image has been making the rounds on various facebook pages and blogs, comparing President Obama's promises about insurance while campaigning for the Affordable Care Act (aka Obamacare) to Henry VIII and the Dissolution of the Monasteries. (You might recall that comparisons between Henry VIII and President Obama have come up before in the context of the HHS Mandates on contraceptive, abortafacient, and sterilization coverage.) I don't think that Henry VIII--whose only campaigns were military--ever made such a promise, but﻿ certainly on this day, November 15, in 1539, the Abbots of Glastonbury and Reading Abbeys found out that they could not keep their monasteries open. Blessed Richard Whiting, Blessed John Thorne, and Blessed Roger James were executed on Glastonbury Tor near their empty and soon to be desolated abbey, and Blessed Hugh (Cook) Faringdon, Blessed John Rugg and Blessed John Eynon were executed at Reading Abbey.

Glastonbury was one of the richest abbeys in the kingdom, and one of the best run and most observant of the Rule of St. Benedict: it was a ripe target for Henry VIII, Thomas Cromwell, and the Court of Augmentations. Cromwell had to trump up some charges against the elderly abbot. Both Abbot Whiting and Abbot Faringdon of Reading Abbey had gone along with Henry VIII's claims of supremacy over the Ecclesiae Anglicanae, but when they refused to surrender their monasteries, they surrended their lives.

More about the martyrs at Glastonbury here and about those at Reading . Perhaps their martyrdoms expiated their guilt for denying the authority of Christ's Vicar on earth: These six martyrs of the Dissolution of the Monasteries on November 15, 1539 (three each at Reading and Glastonbury) represent in some ways the remorse of the abbots and abbey leadership, who had accepted Henry VIII's oaths that proclaimed his authority over the Church of England as Supreme Head and Governor. Somehow they did not realize or imagine what he could and would do with that power and authority.
Posted by Stephanie A. Mann at 12:30 AM