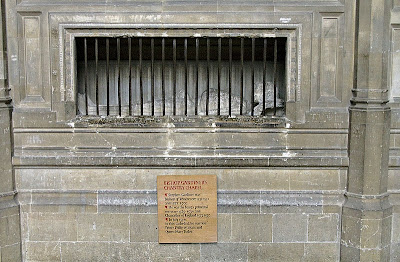 Stephen Gardiner, Mary I's Chancellor and the Bishop of Winchester, died on November 12, 1555. While he had supported Henry VIII's supremacy, he also opposed Edward VI's Calvinist Reformation, and then he assisted Mary I, and renounced  his views on the supremacy, since that was a role she rejected. The 1910 Encyclopedia Britannica summed up his life and character thusly:

Perhaps no celebrated character of that age has been the subject of so much ill-merited abuse at the hands of popular historians. That his virtue was not equal to every trial must be admitted, but that he was anything like the morose and narrowminded bigot he is commonly represented there is nothing whatever to show. He has been called ambitious, turbulent, crafty, abject, vindictive, bloodthirsty and a good many other things besides, not quite in keeping with each other; in addition to which it is roundly asserted by Bishop Burnet that he was despised alike by Henry and by Mary, both of whom made use of him as a tool. How such a mean and abject character submitted to remain five years in prison rather than change his principles is not very clearly explained; and as to his being despised, we have seen already that neither Henry nor Mary considered him by any means despicable. The truth is, there is not a single divine or statesman of that day whose course throughout was so thoroughly consistent. He was no friend to the Reformation, it is true, but he was at least a conscientious opponent. In doctrine he adhered to the old faith from first to last, while as a question of church policy, the only matter for consideration with him was whether the new laws and ordinances were constitutionally justifiable.

His merits as a theologian it is unnecessary to discuss; it is as a statesman and a lawyer that he stands conspicuous. But his learning even in divinity was far from commonplace. The part that he was allowed to take in the drawing up of doctrinal formularies in Henry VIII's time is not clear; but at a later date he was the author of various tracts in defence of the Real Presence against Cranmer, some of which, being written in prison, were published abroad under a feigned name. Controversial writings also passed between him and Bucer, with whom he had several interviews in Germany, when he was there as Henry VIII's ambassador.

He was a friend of learning in every form, and took great interest especially in promoting the study of Greek at Cambridge. He was, however, opposed to the new method of pronouncing the language introduced by Sir John Cheke, and wrote letters to him and Sir Thomas Smith upon the subject, in which, according to Ascham, his opponents showed themselves the better critics, but he the superior genius. In his own household he loved to take in young university men of promise; and many whom he thus encouraged became distinguished in after life as bishops, ambassadors and secretaries of state. His house, indeed, was spoken of by Leland as the seat of eloquence and the special abode of the muses.

He lies buried in his own cathedral at Winchester, where his effigy is still to be seen. (Image credit for his chantry tomb: wikipedia commons.) His last words were: "I have erred with Peter, but have not wept with Peter."
The bishop has been in the news lately, as an important document of the English Reformation was recently sold at auction, but its export has been prevented, per this story from The Guardian:
A 16th-century manuscript that shines a light on a furious battle between two bishops of Winchester, over the then touchstone Reformation issue of clerical marriage, has had a temporary export bar placed on it. The culture minister, Ed Vaizey, announced the bar on Thursday in the hope that someone will find the money to keep the manuscript in the UK.
The paper's abridged title is A Traictise declarying and plainly prouying, that the pretensed marriage of Priestes … is no mariage (1554), and was sold by the Law Society at Sotheby's in June for £116,500, nearly six times the upper estimate.
The manuscript contains two diametrically opposed positions on clerical marriage. There is the anti-marriage stance of Stephen Gardiner and the virulently pro-marriage opinions of John Ponet, one of Thomas Cranmer's righthand men and a key figure in the English Reformation.
It was Ponet who replaced Gardiner as bishop of Winchester in 1551, although his tenure lasted only two years, before he was forced to flee England when the Catholic Mary Tudor came to the throne in 1553. Gardiner then resumed the job.
It's interesting to note that John Ponet survived Gardiner only by several months, as he died in August of 1556. Ponet argued for tyrannicide--specifically, the execution of Mary I--while in exile on the Continent in A Shorte Treatise of Politike Power.
Posted by Stephanie A. Mann at 12:30 AM