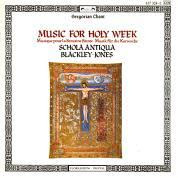 Years and years ago, my husband bought me this CD when he went to a conference in Dallas, Texas. It was released on the L'Oiseau-Lyre label in 1989 and has been rereleased now by ArchivMusic:
Barbara Katherine Jones and John Blackley direct Schola Antiqua in this 1985 collection of traditional Music for Holy Week, released as part of the Florilegium series on the L'Oiseau Lyre label.

A leader of its time, this recording represents Schola Antiqua's interpretation on the subject of proportional rhythm. Up until the point of this recording, most renderings of the music were based on the principle that all notes were fundamentally of equal length.

Founded in 1972 for the study and performance of chant and early liturgical music, Schola Antiqua's discography also includes Plainsong and Polyphony from Medieval Germany and A Guide to Gregorian Chant.
The first hymn on the CD is Venantius Fortunatus's Vexilla Regis:

The disc also contains the Ordinary for Maundy Thursday and Responsories, Antiphons, and the Improperia for Good Friday, concluding with the hymn Crux Fidelis/Pange Lingua, also by Fortunatus.

For years, I have also enjoyed listening to the Choir of King's College, Cambridge CD of Music for Holy Week conducted by Philip Ledger. 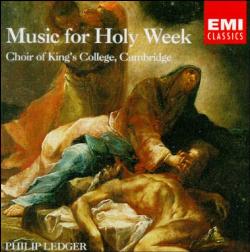 Unfortunately, this CD is out of print, but it includes music by Thomas Tallis, John Taverner, and Orlando Gibbons. The cover features a detail of Lamentation by Paul Troger, an Austrian artist who specialized in those Baroque ceiling paintings of apothesis and triumph, especially in monastic buildings and churches throughout Austria (including Melk Abbey).
Happy Holy Week: may the celebration of the Lord's Passion and Death deepen our devotion to Our Savior and bless us with His peace and salvation. I'll be taking a break from the blog after the Monday of Holy Week.