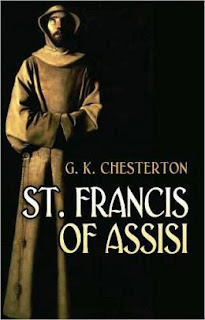 William Oddie offers us another reading option to start connecting with Pope Francis, named in honor of St. Francis of Assisi: Chesterton's biography of that great saint. In The Catholic Herald, Oddie writes:

I had been told that Pope Francis was an admirer of Chesterton and was googling around trying to see if there was anything out there that might confirm it. I suddenly realised that it was I myself who over 15 years ago had written that Sunday Telegraph article. Suddenly I wondered: who was the archbishop who had signed the letter? Not a certain Archbishop Bergoglio, by any chance? If so, my own ambition that procedures towards Chesterton’s canonisation should indeed be initiated had just taken a major step towards being realised. But no: Pope Francis became archbishop only in 1998. But he was in 1995 a close colleague of his predecessor, as an auxiliary bishop of Buenos Aires: did he too sign the letter? [Emphasis added.]

The web yielded just one nugget of possibly accurate information, and if anyone can verify it, it would be of considerable interest to me. It’s a little circuitous; according to the Italian Chesterton Society, the Societa Chestertoniana Italiana: “Pare che Papa Francesco sia socio della Società Chestertoniana Argentina”: “It seems that Pope Francis is a member of the Argentine Chesterton Society.” Unfortunately, that society’s website says nothing of this, but it looks to me as though it hasn’t been touched for some time, and may be moribund (it happens).

It wouldn’t, however, surprise me at all if the claim were true. The obvious link could be Chesterton’s great work on St Francis. I thought immediately of one passage which seemed to be directly relevant to the Pope’s clear determination not to be steered spiritually off course by the power and dignity of his new position. It begins with a discussion of why St Francis called his followers friars (which Chesterton translates as “Little Brothers”) rather than monks:

“Presumably he was already resolved… that they should take the three vows of poverty, chastity and obedience which had always been the mark of a monk. But it would seem that he was not so much afraid of the idea of a monk as of the idea of an abbot. He was afraid that the great spiritual magistracies which had given even to their holiest possessors at least a sort of impersonal and corporate pride, would import an element of pomposity that would spoil his extremely and almost extravagantly simple version of the life of humility. But the supreme difference was concerned, of course, with the idea that [his] monks were to become migratory and almost nomadic instead of stationary. They were to mingle with the world; and to this the more old-fashioned monk would naturally reply by asking how they were to mingle with the world without becoming entangled with the world. It was a much more real question than a loose religiosity is likely to realise; but St. Francis had his answer to it, of his own individual sort; and the interest of the problem is in that highly individual answer.”

Monastic humility, says Chesterton, in this new Franciscan version, is to be attained by mingling with the world: St Francis, too, doubtless, would have taken public transport rather than the official limos which would no doubt today be offered, and he certainly lived simply (as did Archbishop Bergoglio) rather than in the luxury he could have had.

I love that comment: "I suddenly realised that it was I myself who over 15 years ago had written that Sunday Telegraph article." Any excuse to read or re-read Chesterton! More on his book on St. Francis of Assisi here, from Dale Ahlquist and the American Chesterton Society.
Posted by Stephanie A. Mann at 12:30 AM