A couple of shows on EWTN's The Journey Home, hosted by Marcus Grodi of the Coming Home Network have an English Reformation connection:

On Monday, February 25, Msgr. Jeffrey Steenson [ ]the Ordinary of the Personal Ordinariate of the Chair of Saint Peter, established for Anglicans who want to be Catholic. As a former Episcopal bishop, he discusses with Marcus what convinced him to become a Catholic.

Father John Saward is the Pastor at SS Gregory and Augustine Catholic Church in Oxford and posts this biography:

Fr John Saward was born in 1947, and first trained for the Anglican ministry, receiving Anglican orders in 1972. He was received into the Catholic Church in 1979.

After many years teaching theology in Catholic institutions, he was ordained priest in 2003 and made Priest in Charge of SS Gregory & Augustine in 2005.

Fr Saward is also a Fellow of Blackfriars, the house of studies of the Dominicans, which is a Permanent Private Hall of Oxford University.

He is the author of numerous works of theology, and the official English translator of Pope Benedict XVI's work, 'The Spirit of the Liturgy.' 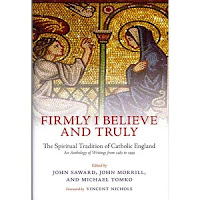 Here is a link to his C.V. He is one of the editors of Firmly I Believe and Truly: The Spiritual Tradition of Catholic England 1483-1999, a lovely big book I dip into all the time. He is also the author of The Beauty of Holiness and the Holiness of Beauty; The Mysteries of March: Hans Urs Von Balthasar on the Incarnation and Easter, and Redeemer in the Womb, three books I have read and learned much from. Perhaps I'll re-read The Mysteries of March for Lent.

From the website of the Personal Ordinariate of the Chair of St. Peter comes this biography of Monsignor Jeffrey Steenson:

Pope Benedict XVI appointed Rev. Jeffrey N. Steenson as the first Ordinary of the Personal Ordinariate of the Chair of Saint Peter on January 1, 2012.

Fr. Steenson teaches patristics (the study of the early church fathers) at the University of St. Thomas and St. Mary’s Seminary in Houston, TX.

Ordained an Anglican priest in 1980, he served Episcopal parishes in suburban Philadelphia, Pa. (from 1983), and Fort Worth, Texas (from 1989), before becoming canon to the ordinary in the Episcopal Diocese of the Rio Grande (New Mexico and far west Texas) (in 2000). In 2004, he was elected bishop of that diocese. Fr. Steenson was educated at Trinity College, Trinity Evangelical Divinity School, Harvard Divinity School and the University of Oxford, where he received a doctor of philosophy degree in 1983.

Fr. Steenson has been keenly interested in the question of Catholic unity for many years, drawn to this path, as so many Anglicans and others have, through the writings of the church fathers. Patristic study is one of the glories of the Anglican theological tradition, and perhaps no text better illustrates this trajectory as well as these words from St. Irenaeus of Lyon in the later 2nd century: “It is necessary that all churches be in accord with this church [Rome] on account of her more excellent apostolic foundations” (Against Heresies 3.3.2).

These should be two fascinating episodes.

UPDATE: EWTN is pre-empting the Monday, February 18 episode for the PRAYER VIGIL AND ROSARY FOR DEACON WILLIAM STELTEMEIERFr. Miguel, Celebrant and Fr. Wade Menezes, Homilist. for the repose of the soul of the Founding President and long time Chairman of EWTN, Deacon William Steltemeier. The "repeat" schedule is:

May Deacon Bill rest in the Peace of Christ. I met him and his wife when I travelled to Irondale, Alabama for EWTN Live and EWTN Bookmark broadcasts.
Posted by Stephanie A. Mann at 12:30 AM